Gilead is charging $2,340 for remdesivir. State officials are asking the federal government to make the coronavirus drug cheaper.

By cadaily on August 6, 2020
This post was originally published on this site

A bipartisan group of state attorneys general is urging the federal government to sidestep the patents held by Gilead Sciences for remdesivir, the only authorized treatment for COVID-19, over frustration with pricing and supplies set by the manufacturer.

In arguing their case, the state officials maintain Gilead has been “unable to assure” a sufficient supply of the medication to hospitals across the US and has “[placed] its profit margins” over patients by charging the federal government $2,340 for a five-day treatment course, even though US taxpayer dollars contributed to the discovery of the drug and manufacturing costs are reportedly low.

“Remdesivir has benefited from millions of dollars of public funding,” the group, comprised of dozens of attorneys general, wrote to the Department of Health and Human Services. “But despite the large infusion of taxpayer monies, Gilead is unable to guarantee a supply of remdesivir sufficient to alleviate the health and safety needs of the country amid the pandemic.” The Public Citizen advocacy group recently estimated that US taxpayers contributed $70.5 million to discovering the drug.

Specifically, they want HHS to use a provision of the Bayh-Dole Act known as march-in rights, which allow the government to reclaim patents as a way to address prescription drugs that are out of reach for different reasons. Although highly controversial among drug makers and their supporters, the concept has gained traction in recent years in response to the national debate about the high cost of medicines. Reclaiming the patents would allow other companies to make generic versions of the drug.

The US government has the power to override patents

A growing number of lawmakers, academics, and consumer advocates contend a government agency that funds private research, such as the NIH, can require a drug maker to license its patent to another party in order to “alleviate health and safety needs which are not being reasonably satisfied.” An agency can also do so when the benefits of a medicine or other medical product are not available on “reasonable terms.”

An HHS spokeswoman sent STAT the following: “We can only exercise march-in rights where the intellectual property to make the product, as a whole, was funded by the federal government. In short, all of the patents underlying the product have to have been conceived or reduced to practice with federal funds for Bayh-Dole’s march-in provision to be of any practical significance. We do not believe this to be the case here.”

A vial of the Ebola drug Remdesivir as seen during a press conference about the start of a clinical trial, April 8, 2020. ULRICH PERREY/POOL/AFP via Getty Images

Later, a Gilead spokesman wrote that the company is “deeply disappointed that a group of state attorneys general have chosen to misrepresent facts on access” to remdesivir. The letter is “premised on multiple factual inaccuracies and a fundamental lack of understanding of how remdesivir is being used to treat patients.” He added that pursuing march-in rights “will do nothing to speed access to remdesivir,” in part because it takes six to 12 months to manufacture remdesivir, which is an intravenous medication.

The letter arrives amid growing tumult over remdesivir, which has made Gilead a flashpoint in the intensifying debate over the cost of COVID-19 medicines and vaccines. Across the world, there is growing concern over access to such medical products, and governments are furiously trying to sort out costs while striking deals for supplies.

In the US, federal agencies such as the Department of Veterans Affairs are paying $390 a vial, or $2,340 for a five-day treatment course and committed to purchasing most of the available supply through the end of September. Commercially insured patients will be charged more: $520 for a vial, or $3,120 over five days. Medicaid and Medicare will also pay the higher rate.

As noted previously, Gilead has maintained that if remdesivir resulted in earlier hospital discharges, the drug could save about $12,000 per patient. In fact, the US price is notably lower than the $4,580 to $5,080 range for a treatment course considered cost effective by the Institute for Clinical and Economic Review, a nonprofit that assesses the value of medicines. 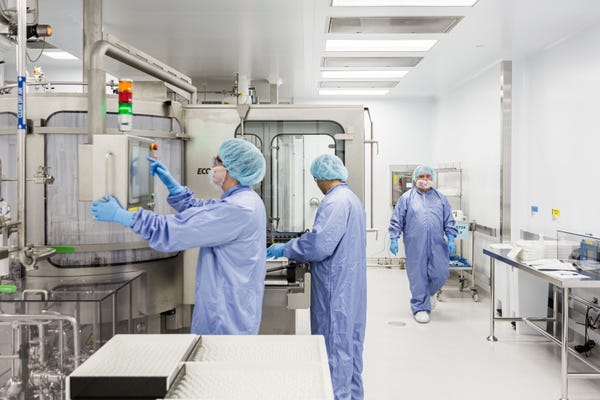 One caveat, though, is that this assumes a mortality benefit. Without a mortality benefit, the cost effective price drops to $310. Also, the cost effective price would drop to $2,520 to $2,800 if patients also received dexamethasone, an old steroid that a study indicated is also useful in treating some patients. Moreover, a recent study in the Journal of Virus Eradication suggested it costs 93 cents for a day’s supply, although Gilead has vigorously disputed this.

The HHS spokeswoman wrote that hospitals will not pay more than the approximately $3,200 list price per treatment course.

“Generally, patients do not pay directly for hospital-administered drugs like remdesivir. Rather, for Medicare and most private insurers, the drug’s cost is incorporated into payments made by the insurer,” she concluded.

Meanwhile, the AGs are concerned about supplies. Gilead plans to make 2 million treatment courses by the end of this year. Since a full treatment requires anywhere from six and 10 vials, Gilead is projected to produce between 12 million to 20 million vials.

“Despite the company’s efforts to scale up its production capacity, Gilead’s production projection remains dangerously low and insufficient to handle the current domestic demands, let alone future demands for the antiviral drug,” they wrote.

They also raised concerns about the amount of remdesivir earmarked for Americans. The AGs speculated that if Gilead supplies 85% of its output to the US alone, only 1.7 million of the 4.6 million confirmed COVID-19 patients currently in the US would have access to a full treatment. And even at 90% of production, 1.8 million patients would receive the drug.

“This dangerously low supply and unmet demand is an example of market failure,” the AGs contended.

However, the Gilead spokesman maintained that current NIH guidelines recommend remdesivir is prioritized for hospitalized patients requiring supplemental oxygen: “This represents a very small percentage of patients diagnosed with COVID-19 and, as of today, most eligible patients hospitalized in the U.S. are able to get remdesivir.”

He added that Gilead is investing more than $1 billion in remdesivir, which includes manufacturing and partnerships, which will enable the company to make two million courses of therapy this year. As a result, he insisted Gilead expects to meet and exceed actual projected patient demand for remdesivir globally in October.

Lawmakers have urged the government to investigate the discovery of remdesivir

Nonetheless, the issue recently prompted several Democratic lawmakers to ask the Government Accountability Office to investigate the discovery and development of remdesivir, given the role played by taxpayer funding.

As STAT reported previously, Gilead and US government scientists were co-authors of a paper in Nature showing remdesivir held promise in fighting several coronaviruses, and some of the same names appeared on a 2015 US patent application for a compound later identified as remdesivir. The paper also noted testing was conducted at high-risk security labs run by the federal government.

The role played by the federal government in developing remdesivir to combat coronaviruses has, in fact, involved various grants to universities, as well as contributions from government personnel at such agencies as the US Army Medical Research Institute of Infectious Diseases, according to Knowledge Ecology International, an advocacy group that first disclosed these connections.