65 marathons, 1 treadmill, 0 days off: How a Navy fitness trainer took on a world record during lockdown in Italy

By feedback@businessinsider.com Christopher Woody on June 4, 2020
This post was originally published on this site

Even before Italy locked down in response to the coronavirus, Alyssa Clark could tell something more severe was coming.

“It was probably mid-February where we started having [authorities say] if you’ve traveled in this region, you need to make sure that you are reporting where you’ve been … and if you have any fevers or coughs, reporting it,” said Alyssa, who until recently lived in Quadrelle, a town near the headquarters of US Naval Forces Europe-Naval Forces Africa in Naples, with her husband, Navy Lt. Codi Clark.

“We started to have a premonition that it was going to get a lot worse, and then Northern Italy was really slammed, and they started imposing pretty harsh restrictions on March 9,” which was the “last day of freedom,” Alyssa said in a May 22 interview.

Across Italy, authorities clamped down. As the country’s hospitals strained with patients, politicians confronted residents who disobeyed the stay-at-home orders.

“We could not walk, run, or travel in a car except to go to and from work or to and from the grocery store, and we had to carry papers with us,” Alyssa said. “We could be stopped by police at any time and be fined if we were not moving within those restrictions.”

A Morale, Welfare and Recreation fitness specialist with Naval Support Activity Naples, Alyssa was the only one in her building at the military complex’s Capodichino location.

Isolation may have been important for public health, but for Alyssa, an ultra-marathoner who’s run everything from 32-milers to multi-day stage races of more than 150 miles, just sitting at home wasn’t appealing.

“I am a competitive ultra runner, and I always have a very set racing schedule. I had some big goals for this year and then everything started getting canceled,” Alyssa said. “So I was looking for the next project that I could take on.”

“I was toying with a few ideas and kind of randomly thought, ‘Oh, wouldn’t it be interesting to try to run a marathon every day while we’re under lockdown?'”

‘Oh, this is a possibility’

The original plan was to run a marathon every day until people could run outside again. “Then I started looking up what the world record is for consecutive days running a marathon, and I started getting closer and closer to that and thinking, ‘Oh, this is a possibility.'”

For women, that record is 60 days straight. She ran the idea by Codi, who said it was “pretty feasible” for her. “And it just has continued to snowball,” Alyssa said.

Insider spoke to Alyssa just hours after she finished her 53rd marathon, another four- to five-hour hour outing on a small treadmill.

“We have an upstairs room that we don’t use very often, so it just has a couch and a TV that doesn’t really work,” Alyssa said. An open door let in sunlight and a Velcro sticker kept her iPad fastened to the treadmill so she could watch “easily digestible” shows like “Love is Blind” and “Too Hot to Handle.”

“Luckily I had an AC fan on me, and then I have my nutrition set up next to me and a water bottle,” Alyssa said. “Pretty basic, but it works.”

Staying energized was a challenge, especially for Clark, who has a compromised immune system. “I have ulcerative colitis,” Alyssa said. “I actually had my colon removed when I was 14. That’s a whole other story.”

Now gluten-free, Clark eats rice cakes with peanut butter and bananas before running and has gluten-free waffles while on the treadmill.

“I often eat snickers bars — it’s a very good source of energy and sugar,” Alyssa said. “Ultra-marathoners love drinking Coca-Cola, so oftentimes that will be a good pick-me-up.”

So is sugar-free Red Bull. “I actually did about one of those every marathon for quite a while,” she added. 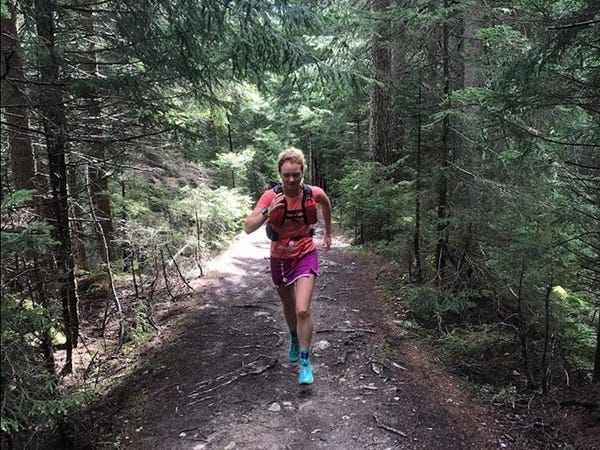 Alyssa Clark on a run before lockdown. Courtesy photo

Running marathons is taxing — running them on a treadmill even more so.

Alyssa is very specific about her shoes, using ones she trusts and that offer a lot of cushion. “I’ll rotate two pairs, and I’ll probably throw in another pair by the end, and I was using a couple of pairs to start. So I probably used three to four pairs of shoes.”

In addition to stretching, Alyssa said she uses lotion to help with recovery after running. “I’ve been starting to have a little bit of quad pain that I seem to have wrangled, but I’ve been icing that a bit,” she added.

“I also have a lot of external motivation from people reaching out to me saying that they’re going on runs, that they haven’t been on a run forever and I’ve been motivating them to get out, and also other people saying, you’re inspiring me to get healthier to keep going during this lockdown that’s really challenging, and so that really has helped me keep going when things get tough,” Alyssa added.

Days after speaking, Codi and Alyssa left Italy for the US and their next duty station, but Alyssa kept after the record, setting a goal of completing a marathon each day before midnight Italian time.

“We will be flying out on Tuesday [May 26] to go to Germany. So I will do one Tuesday morning before we leave, and then in Germany before we leave the next day I will do another one on the Air Force base, and then we’ll fly to Virginia,” Alyssa said.

“The hard part with this is it’s not a 20-hour event or a 12-hour-a-day event. It’s only a four- to five-hour a day event,” Codi said in the May 22 interview. “So my job during this time has been to force her to attempt to stay in bed and put her feet up and do that kind of focus on recovery.”

Alyssa finished her 60th marathon in Norfolk, Virginia, on the last weekend of May. Marathon 61, and with it the unofficial women’s world record for consecutive days running a marathon distance, came the next day in Charleston, South Carolina. Marathon 62 followed amid protests across Charleston, Clark said in an Instagram post.

Marathon 63 came on Monday evening, after five days of travel, with the couple having finally reached their new duty station in Panama City Beach, Florida. Tuesday and Wednesday brought marathons 64 and 65.

Alyssa’s most recent marathons went the same way her first did: step after step, minute after minute.

“None of these happen by trying to jump into running 10 miles right away. It’s breaking it down, doing what you can, and being consistent. Consistency is the key to success,” Alyssa said when asked for advice to prospective marathoners.

But passion is important, and no one should feel compelled to take up long-distance running, she said.

“Find something you enjoy, because that’s way more important than forcing yourself to do something you don’t love. I love running. I get to do four hours of what I love every day, and that is incredible.”