'We don't know any more than you know': Lawmakers in the dark about how Trump is using military against protests

By feedback@businessinsider.com Christopher Woody on June 2, 2020
This post was originally published on this site

National Guard troops have fanned out across the country in response to protests sparked by the death of George Floyd after his brutal arrest by police in Minnesota, and President Donald Trump has threatened to deploy active-duty troops to help quell unrest.

But the top Democrat on the House Armed Services Committee says the White House and the Defense Department haven’t explained what role the military will play in those domestic operations.

“The biggest concern we have is how the US military is going to be used. Certainly there’s a legal concern given Posse Comitatus, the Insurrection Law — will it be done within the law? But also there is a broader concern about whether or not it will be used in the right way,” Rep. Adam Smith, chairman of the House Armed Services Committee, told reporters Tuesday.

Smith spoke hours after heavily armed police, supported by members of the District of Columbia National Guard, cracked down on peaceful demonstrators yards from the White House, scattering them with tear gas to allow Trump, accompanied by senior administration and military officials, to take a photo with a Bible by a church that was defaced during protests on Sunday night.

President Donald Trump holds a Bible while visiting St. John’s Church across from the White House after the area was cleared of people protesting the death of George Floyd June 1, 2020, in Washington, DC BRENDAN SMIALOWSKI/AFP via Getty Images

“If the president is basically threatening to use the US military to go in and enforce the law in US cities, that runs the risk of an extreme escalation of violence,” Smith added Tuesday. “What we saw yesterday was really disturbing.”

During a call with governors earlier on Monday, Defense Secretary Mark Esper echoed Trump by encouraging them to “mass and dominate the battlespace” to disperse protests. Esper and Chairman of the Joint Chiefs of Staff Gen. Mark Milley, the latter in battlefield uniform, were with Trump in Lafayette Park on Monday evening.

On Tuesday morning, a senior defense official attempted to distance military leaders from those events, saying Esper and Milley were not aware of the decision to clear the area and that National Guard troops there were not equipped with tear gas or rubber bullets.

On Tuesday, Smith said he was told the military did not clear the park.

“But the decision to fire tear gas, basically to violently disperse a crowd of peaceful demonstrators to walk across the street for a photo op, sends the exact wrong message across the country,” Smith said. “And the US military, if used in this situation, sends a message to people that, as the president has said, it’s a battlefield.” 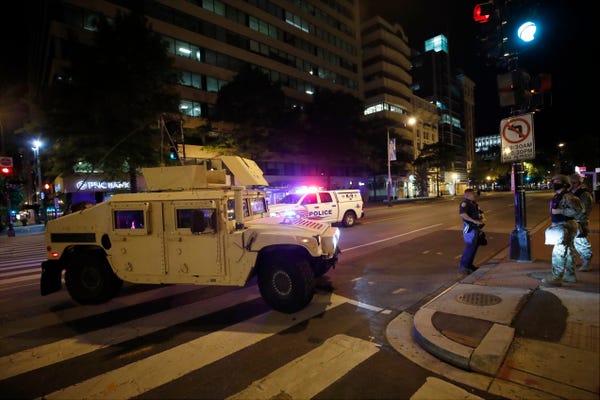 A military Humvee blocks an intersection on K Street in downtown Washington, DC, during protests over the death of George Floyd, June 1, 2020. Associated Press

In addition to the National Guard troops in Washington, DC, aircraft, some belonging to the military, flew over the city throughout Monday night. Flight-trackers also picked up military aircraft from bases around the country moving in and out of a nearby Air Force base.

Smith said Tuesday that his committee had not been informed about the use of military personnel in the capital.

“That’s why we want to have this conversation. We don’t know any more than you know at this point about why those troops were called to the DC region and what the plan is to use them,” Smith told reporters. “We don’t know, and we need to know.”

Speaking from Washington state, Smith said that he plans to call Esper and Milley to testify before his committee in person next week to explain how the military will be used going forward.

“They’re in charge of the US military,” Smith said, “what role did they envision the US military playing, dealing with the violence and the protests that we’ve seen in the cities?”

“We want to have a hearing where they’re sitting there, we’re sitting there, and we hear from them … how do they see their role? We want to know how they’re going to exercise their title 10 authority and their Title 32 authority,” Smith added, referring to laws covering the federal government’s use of the active-duty military and the National Guard.

When Esper “says he wants to occupy the battle space” in reference to US cities, “I think that is wrong,” Smith said. “I would like them to say, ‘Yeah, we got a little exuberant here. That is not the way we should handle this.'”

“Now what’s the likelihood of them changing their mind on this? I don’t know. But we need as leaders … to try and deliver that message,” Smith said. “We want to try to pressure them to tone down the over-the-top rhetoric.”

‘We want to get clear answers’ 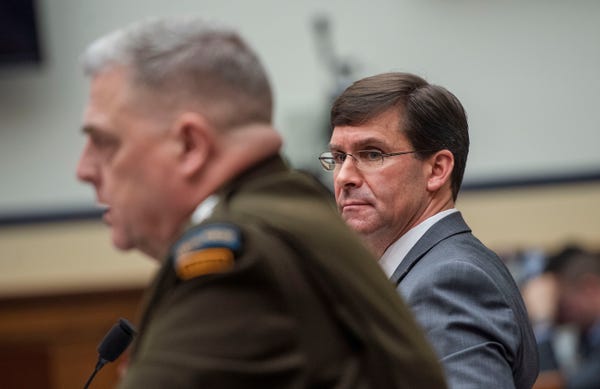 Smith is one of many lawmakers who have criticized Trump’s use of the military and questioned military leaders’ responses to Trump’s directives.

Milley — who, as chairman of the Joint Chiefs, is not in the chain of command and can’t command troops — attracted particular scrutiny for appearing alongside troops in DC on Monday. Rep. Ruben Gallego, a Democrat and Marine Corps veteran from Arizona and member of the House Armed Services Committee, published a letter to Milley asking only, “Do you intend to obey illegal orders from the President?”

Smith, who spoke briefly to Milley on Monday night, said he thought the message Milley was trying to deliver to troops was “appropriate” but that the Army general may have “misread” the optics of walking around the US capital in his battlefield uniform — optics that might not be so bad if Esper and Trump hadn’t used such provocative rhetoric, Smith added.

“Other than the rhetoric, we have not had a specific explanation of here’s what the military is going to do and here’s what they’re not going to do,” Smith said. “We need to know. We need to be able to properly exercise our oversight and understand that.”

Trump is given to saying things that turn out to be false, Smith added, “but the rhetoric matters, and obviously it’s some piece of what the US military is actually doing as well. We want to get clear answers to those questions from Department of Defense.”