'Blindsided' with no backup plan and rents closing in: Laid-off NYC restaurant workers describe how their lives have changed as their industry collapses around them

By kwarren@businessinsider.com Katie Warren on March 29, 2020
This post was originally published on this site

With the coronavirus spreading through the New York City area, Mayor Bill de Blasio mandated that all of the city’s restaurants be shut down for dining service effective March 17.

On March 18, Danny Meyer’s Union Square Hospitality Group, which operates 18 restaurants in the city including Gramercy Tavern, the Modern, and Manhatta, laid off 80% of its workforce — about 2,000 employees. The next day, Gerber Group, which operates eight bars and restaurants in the city, including the Lower East Side’s Mr. Purple and and the Sunken Lounge in JFK’s TWA Hotel, laid off the majority of its staff, about 400 people. Countless other restaurants followed suit.

“We were all blindsided by it,” Peter Barry, a 25-year-old cook who was recently laid off from Rezdora, an upscale Italian restaurant in Manhattan’s Flatiron District, told Business Insider.

Barry said he’s been in the industry for more than 10 years and it’s all he knows. His first job was working alongside a chef two days a week in the country club his family belonged to.

“It’s not like I was in medicine before or insurance or accounting,” he said. “I can’t fall back on anything.”

As the coronavirus pandemic ravages the US economy, Barry, along with many of the approximately 167,000 others who were previously employed by New York City’s restaurant industry, is facing an uncertain future.

New York City has become the epicenter of the coronavirus pandemic in the US, with more than 25,000 cases reported so far. Mayor de Blasio’s restaurant mandate left thousands of restaurant workers — from chefs and sommeliers to servers and dishwashers — unemployed virtually overnight. A record 3.3 million people filed for unemployment benefits for the week ending March 21, far outstripping the record of almost 700,000 newly filed claims set in 1982.

While fast food workers have been deemed essential workers during the pandemic, the statistics in the restaurant industry are grim. The National Restaurant Association estimates that between five and seven million people working in the restaurant industry could lose their jobs by June because of the coronavirus outbreak. Some restaurants, like Carbone, with its famous $69 veal Parmesan, have pivoted to delivery so effectively that crowds of delivery workers have been photographed lined up outside its doors. Many other establishments, however, found that takeout and delivery models wouldn’t be economically feasible and closed their doors completely.

Business Insider spoke to six high-end restaurant employees in New York City, including cooks, a server, and a manager, all of whom had lost their jobs or been put on unpaid leave in the past 10 days. Despite the ubiquitous layoffs, the restaurant workers who spoke to Business Insider didn’t have any animosity toward their employers for laying them off. They — and their friends, many of whom also work in the industry — were simply wondering how they would afford to live.

A month ago, Barry says, if he had found himself short on cash, he could have called up a dozen friends to see if they needed a shift covered. “But now, everyone is out of work,” he said.

Rachel Green, a 24-year-old pastry cook who was laid off last week from Manhatta, a Union Square Hospitality Group fine dining restaurant on the 60th floor of a Financial District skyscraper, said everyone she knows in the city works in the restaurant industry.

“My last friend that had a job just got laid off as well,” Green told Business Insider. 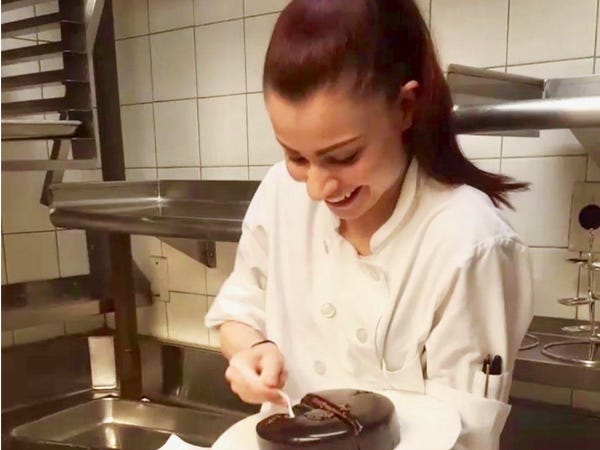 Rachel Green is a cook was laid off from Manhatta, a fine dining restaurant in the Financial District. Rachel Green

A common — and arguably the biggest — concern among every person Business Insider spoke to was how they were going to pay their rent.

A junior chef who was recently laid off from Per Se, a three-starred Michelin restaurant in Midtown Manhattan, and who didn’t want her name published because of the restaurant’s strict privacy policy, told Business Insider she was hoping her landlord might offer a rent freeze. Otherwise, she says, she won’t be able to pay it.

Building up a significant financial safety net isn’t feasible for many restaurant employees in the city, where the median rent for a one-bedroom apartment as of January 2020 is $2,351 per month.

The minimum wage in New York City is $15, which can be broken down to a $10 cash wage plus a $5 tip credit for food service workers. The hourly workers Business Insider spoke to made said they made between $12 and $17.50 an hour, not including tips. The highest-earning employee was a restaurant manager who made $60,000 before she was furloughed on March 17.

“The thing I’m most concerned about is paying rent because it’s New York — we’re all paying astronomical prices for our housing,” Alex Lynch, a captain at the NoMad who was furloughed and has applied for unemployment benefits, told Business Insider. “And I just moved in October to a new apartment that was a little bit out of my budget, but I had just gotten promoted … so that’s my biggest concern.”

Lynch, who was making $12 per hour plus tips, said she pays $1,500 in rent for her apartment in Bedford-Stuyvesant, Brooklyn. Her tips, which averaged between $18 and $30 per hour, could more than triple her hourly pay. 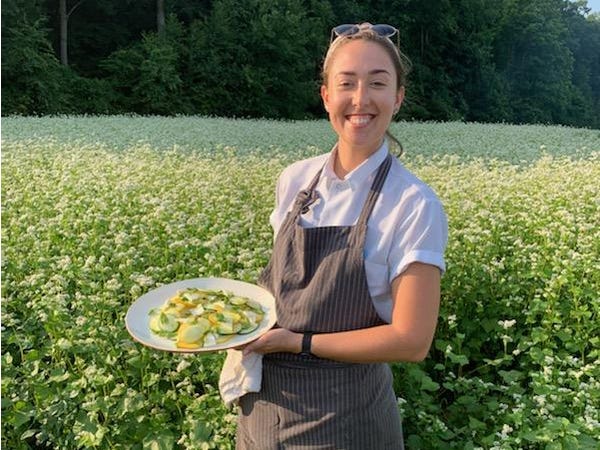 Alex Lynch was a captain, or head server, at the NoMad Restaurant in Midtown Manhattan. Alex Lynch

Green, the Manhatta pastry cook, said tips usually accounted for about a fifth of her paycheck. She works between 39 and 47 hours weekly and takes home between $580 and $700 per week after taxes.

“And that’s considered good money for this industry,” Green said, adding that before she was at Manhatta, she spent three years at Jean-Georges and never made more than $17 an hour. She’s moving into a new apartment at the end of March, which already drained her savings. Now, her rent will be around $950 per month — almost 40% of her average takehome pay.

“A lot of what I had left in the bank account was spent on April rent,” Green said. “So it’s going to be a really tight time between now and getting my unemployment check.”

Unemployment benefits could be a lifeline — whenever they eventually arrive

The restaurant workers who spoke to Business Insider said that filing for unemployment benefits has been one of their biggest obstacles.

The new $2 trillion stimulus bill signed into law by President Donald Trump on March 27 will allow laid-off and furloughed workers to claim an extra $600 per week in unemployment benefits for up to four months.

But the New York unemployment website, overwhelmed by the number of applicants seeking financial relief, has been crashing in recent days. Several restaurant workers said they had to apply multiple times over several days before were able to submit an application. And even then, they were left uncertain about whether their application had been approved and, if so, when they would receive a check and how much it would amount to.

“That whole process is so confusing and convoluted,” Grace Phillips, a manager who was furloughed last week from the Clocktower, a Michelin-starred restaurant in the New York Edition Hotel near Madison Square Park, told Business Insider.

Phillips said she has been able to keep her health benefits while put on furlough, but she seems to be the exception rather than the rule. Restaurant workers are less likely to have health benefits and paid sick leave than other professions.

“Benefits as a whole are pretty scarce in the restaurant industry,” Barry said. “I’d say out of all of my friends that cook, maybe 15% have benefits, and some of them it’s only the transit benefits, like the pre-tax Metrocard. PTO is not really a thing for us. We work through our sick days … No one calls out if they have a runny nose, because we don’t have the insurance for it.”

Barry said he’s taking advantage of being on his parents’ health insurance plan until he turns 26. A trip to San Francisco in January was his first vacation in three years.

‘Stress baking’ and staring out the window

As they wait for the unemployment checks to arrive, New York City’s restaurant workers find themselves adjusting to a new normal.

“Everyone’s going crazy because we’re people who are used to like literally running around on adrenaline for 10 to 12 hours a day and we’re sitting on the floor like staring out the window, you know,” Green said.

“We’re all stress baking at home right now or drinking the bottle of wine we’ve been saving for like the last two years,” Barry said. “… We’re trying to keep our heads up, but I think as a collective, it’s sad. It’s a little bleak.”

The new stimulus bill, which will boost unemployment benefits and offer loans to restaurants so they can keep paying their employees, has created some much-needed hope in the community.

“But there’s still a lot of people [who] haven’t been able to get through on unemployment,” Phillips said. “That whole process is so confusing and convoluted. … I think when everybody starts getting those paychecks, then we can actually be a little bit at ease.”

Do you work in the restaurant industry and have a story to share? Email the reporter at kwarren@businessinsider.com.