While the world focuses on the coronavirus, people in China with other illnesses may pay a price long after the outbreak ends

By salarshani@businessinsider.com Sarah Al-Arshani on February 21, 2020
This post was originally published on this site

China has been rushing to redirect resources toward fighting the new COVID-19 virus. But that could have consequences for people with other illnesses, Tolbert Nyenswah, a research associate at Johns Hopkins University, told Business Insider.

“There are other things that are catastrophic for the population,” Nyenswah said.

China has sent medical workers from across the country to the city of Wuhan, the center of the outbreak. But some estimates suggest the country has less than two physicians for every 10,000 residents, and the coronavirus outbreak has left many overworked and lacking proper supplies.

What’s more, at least 1,700 healthcare workers have caught the virus, and at least seven have died. That is likely already slowing the response to the outbreak.

Combined, this stress on China’s healthcare system is likely to affect people who require care for conditions that are more serious than the novel coronavirus or who might need this care in the future.

The true scope of the outbreak’s impact on those people won’t be clear until later, Nyenswah said.

Emily Ricotta, a research fellow at the National Institute of Allergy and Infectious Diseases, said it’s not uncommon to see these sort of shortages in care for people dealing with other illnesses in times of outbreaks.

“When an outbreak starts, the first response is containment,” Ricotta said.

That means efforts are directed toward limiting and stopping the spread of this novel virus, creating an imbalance in resources available for other conditions.

People in China are already suffering

People with other preexisting conditions are already suffering, The Wall Street Journal reported.

The Journal told the story of Wan Ruyi, a college student with acute lymphoblastic leukemia who has been waiting on a new round of treatment and a bone-marrow transplant but has been given only chemotherapy injections and painkillers at a hospital in Wuhan. She is unable to transfer hospitals amid the quarantine, and her mother told The Journal her daughter was questioning whether she even wanted to stay alive because of the pain.

Nyenswah previously served in Liberia’s health ministry, where he battled the country’s 2014-2016 Ebola crisis. He said that outbreak certainly had a detrimental impact on West Africa’s healthcare system as a whole.

While China’s healthcare system is superior to Liberia’s, he said some inferences about the impact on people dealing with other illness during this outbreak could be made based on what happened with Ebola in West Africa.

According to the US Centers for Disease Control and Prevention, it is estimated that healthcare services were cut in half, which caused setbacks in the treatment and control of other serious diseases. An estimated 10,600 people died from HIV, tuberculosis, and malaria during the epidemic.

A convention center that has been converted into a temporary hospital in Wuhan. Associated Press

Lockdowns prevent people from getting care

Several people in China with HIV told The Journal it had become difficult for them to get access to the medications they needed.

Nyenswah pointed out that the Chinese population is aging and largely dealing with noncommunicable diseases. An estimated 82% of the country’s health concerns come from conditions like diabetes, heart attacks, stroke, and cancer, the CDC reported. Many of these conditions are more fatal than the coronavirus.

China put almost 45 million people in lockdown to stop the spread of the virus. The quarantine of people, as well as resources being diverted toward COVID-19, could mean these people do not receive the care they need.

Nyenswah called the quarantine a “draconian measure” that helped create fear and could prevent people from seeking help for other ailments. In Liberia, he recalled women who would give birth in the street because they feared being exposed to the Ebola virus in a hospital.

Sarah Alexander, an ambassador with the charity ActionAid, which works with women and girls living in poverty, wrote in 2014 that pregnant women feared visiting a hospital and were wary of traveling to a clinic only to be turned away during the Ebola outbreak.

The Journal also reported that in China, during this COVID-19 outbreak, pregnant women with complications have been turned away from hospitals.

While The Journal reported that Wuhan had designated several hospital for patients not dealing with coronavirus, there are still challenges as a result of a shortage of medical staff and supplies. 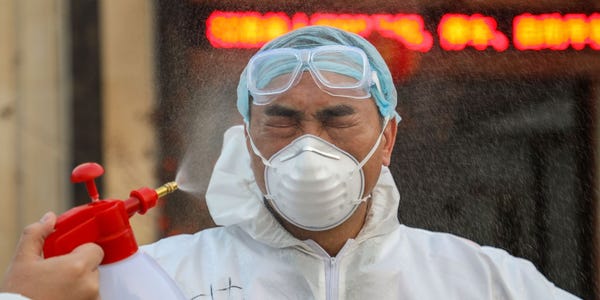 A doctor being disinfected by his colleague at a quarantine zone in Wuhan on January 3. STR/AFP via Getty Images

Ricotta also said one of the struggles with the quarantine was that ambulances might not be available for those who have a heart attack or otherwise need urgent attention.

During the Ebola outbreak, clinics set up to deal with the outbreak sometimes had to turn away people who showed up with other ailments. If they had medications for them, they may give them out, but for the most part those centers strictly assisted those dealing with Ebola.

Ebola, of course, is far deadlier than COVID-19, on average killing about half of those who catch it, though the numbers vary greatly among outbreaks, according to the World Health Organization.

For the coronavirus, Nyenswah recommended isolating people confirmed to be infected and educating the population on ways to protect themselves. He said quarantine policies when dealing with the outbreak “should be based on science” and not “further exacerbate the situation.”

Though there’s no way to tell what the exact toll of the novel coronavirus will have on China’s healthcare system in the long run, the death of healthcare workers already may be slowing down the response to the outbreak.

“People with preexisting conditions, they’re the ones who may suffer,” Nyenswah said.