South Korea accepted that its efforts to stop the coronavirus infecting the country failed, and says it's pivoting to containment

By sbaker@businessinsider.com Sinead Baker on February 21, 2020
This post was originally published on this site

South Korea on Friday accepted that its efforts to stop the deadly coronavirus from taking hold in the country had failed, and said it would switch its strategy to containment.

The nation’s prime minister, Chung Sye-kyun, told a high-level meeting on the virus: “The government has so far focused on curbing infections coming from outside the country.

“From now on, the government will further prioritize preventing the virus from spreading locally.”

According to the Yonhap news agency, Chung said the priority is now “to find people who have contacted infected people, and cure patients.”

An exhibition center converted into a hospital in Wuhan, China on February 5, 2020. STR/AFP/Getty Images

South Korea’s Center for Disease Control and Prevention reported 52 new cases of the virus on Friday and 53 new cases on Thursday.

The new numbers marked a dramatic increase in the number of cases, which now stands at 156, almost three times the figure from Wednesday.

Moon Jae-in, South Korea’s president, said in a Friday statement about the economic impact of the virus: “The current situation is more serious than we think.”

South Korea, like many of the countries near China, had concentrated on trying to stop the coronavirus, first reported by China at the end of December, into the country.

The virus first infected humans in the city of Wuhan, and has spread to at least 26 other countries. The vast majority of cases remain in mainland China, which has reported some 75,000 cases and 2,200 deaths.

The new cases in South Korea make it the most-infected place after China and Japan, which has a high number of cases because of an infected cruise ship. 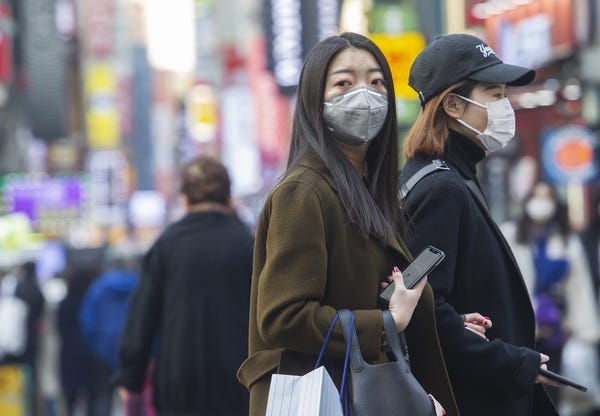 Most of South Korea’s cases are in two clusters: Daegu, the country’s fourth-largest city, and in nearby Cheongdo County.

The two areas have been declared “special care zones,” where authorities are preparing health workers and medical equipment.

Daegu’s 2.5 million residents are being asked to stay at home, preschools have been closed and the military has stopped drafting people from the city.

South Korea’s first death from the virus was recorded in Cheongdo County hospital on Wednesday.

Most of those infected appear to have been part of a religious group, the Temple of the Tabernacle of the Testimony, which is a branch of the controversial Shincheonji Church of Jesus. 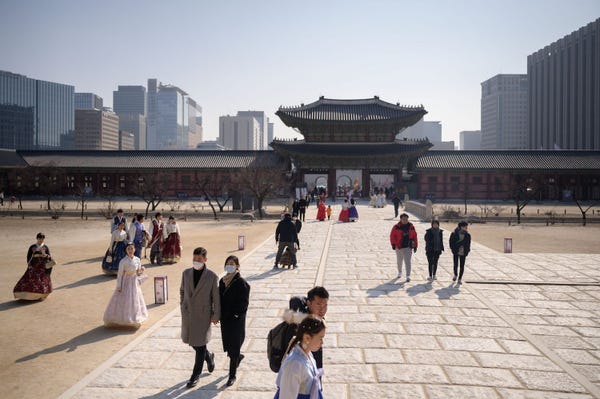 Tourists wearing face masks visit Gyeongbokgung palace in Seoul on February 10, 2020, as a preventative measure after a coronavirus outbreak. Getty

409 members of the church congregation have reported some kind of symptoms, Yonhap reported. Showing symptoms does not necessarily mean somebody has the virus.

The country’s capital city, Seoul, has banned demonstrations at three of its main squares, Yonhap said. Seoul has so far recorded seven cases.

More from HealthMore posts in Health »