Elon Musk's girlfriend Grimes says she is 7 months pregnant, is playing the baby techno in the womb, and considers social media 'an emotionally abusive relationship'

By feedback@businessinsider.com Bill Bostock on February 21, 2020
This post was originally published on this site

Grimes, Elon Musk’s girlfriend, said Thursday that she is seven months pregnant, and that her baby is listening to plenty of techno music in the womb.

In a wide-ranging interview with The Face magazine, the musician was asked what sort of mother she plans to be, and whether techno will play a role in the baby’s upbringing.

The singer, whose real name Claire Elise Boucher, said in an Instagram post promoting the interview that “At 7 months pregnant, I sent my avatar to represent me for the cover of The Face magazine!”

She was referring to “WarNymph,” a persona she created, and discusses at length in the interview.

When asked about what kind of mother she will be, Grimes said music and “raving” will play a big part in it. She said: “The baby has already been exposed to a lot of techno in the womb.”

Grimes first hinted she was pregnant on January 24, confirmed it on February 1.

Her relationship with the Tesla and SpaceX founder became public at the Met Gala in May 2018.

Grimes has not said whether Musk is the father, but fans think that Musk cryptically confirmed the news on Twitter in January.

In the interview Grimes also spoke frankly about her relationship with social media.

“It’s hard on the psyche to have so much negativity thrown your way on a daily basis via social media. I hear about how ugly or stupid or annoying I am every day.”

“It’s sort of like being in an emotionally abusive relationship after a while. It takes a toll,” she said. 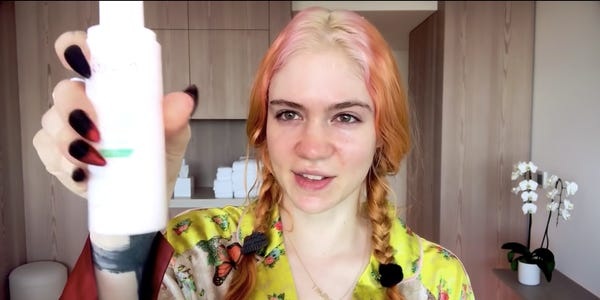 Grimes pictured during a vlog explaining her pregnancy skincare routine for Vogue. YouTube/Vogue

Grimes said that WarNymph, the character on the magazine cover, is a way to separate her online and offline selves.

“Everyone is living two lives: their digital life and their offline life. I want to untether my two lives from each other for mental-health purposes, haha. And also for fun,” she said.

“I’m also pregnant. Having a digital body allows me to keep working throughout the later stages of my pregnancy, and after I have my baby, so I can spend more time with them.”