Chinese jails have become hotbeds of coronavirus as more than 500 cases have erupted, prompting the ouster of several officials

By rmahbubani@businessinsider.com Rhea Mahbubani on February 21, 2020
This post was originally published on this site

Jails in China are the new frontier for the coronavirus.

More than 500 cases of COVID-19 erupted across five penitentiaries across three provinces, according to the Ministry of Justice. This led to a spike in the national tally of the coronavirus, triggered fears of the virus spreading in clusters, and prompted several local officials to be sacked.

The coronavirus has, as of Friday, sickened nearly 76,000 people and killed over 2,200, according to Beijing’s National Health Commission.

According to Justice Ministry official He Ping, over half of the reported cases are in jails in Hubei, the province where the coronavirus outbreak originated in December. Wuhan Women’s Prison has reported 230 cases and Shayang Hanjin Prison another 41, the New York Post said based on Agence France-Presse reports.

The warden of Wuhan Women’s Prison was fired for being unable to prevent the outbreak, local newspaper Hubei Daily reported, the New York Post found.

A woman dons a makeshift protective face shield at a residential compound in Hubei province, the epicenter of the novel coronavirus outbreak. Stringer/Reuters

Information is being ‘deliberately concealed’

In addition, 207 patients, which includes seven prison guards, were found at the Rencheng Prison in Jining, in the eastern province of Shandong. Thirty-four cases have occurred at Shilifen Prison in Zhejiang province, where officials enforced drastic measures, including locking people into their homes and banning weddings and funerals. Some people in custody at a juvenile detention center have also contracted COVID-19, per the South China Morning Post.

In Shandong, a guard at the Rencheng Prison developed a cough and began presenting other coronavirus symptoms in early February. Xie Weijun, Communist Party secretary of Shandong’s Department of Justice, and seven prison authorities lost their jobs, according to local government officials.

“The implementation of our prevention and control measures have not been effective,” Wu Lei, head of the province’s prison administration, told the New York Post.

This situation was mirrored in Zhejiang province, where cases in Shilifen led to two prison officials, including its director, being ousted from their jobs.

“The policeman… was diagnosed with new coronavirus on Jan. 29. He had worked long hours and has come into contact with many people, causing many prisoners to become infected,” Xu said, according to AFP. “All patients are observed in isolation, and all confirmed patients are sent for treatment.”

‘They knew this was serious’

“With a heavy heart and sense of responsibility, I am reporting to you that as of February 20, five prisons in Hubei, Shandong, and Zhejiang have reported infections among their populations,” Ping said.

However, rumors of infections spiking in Shandong’s prisons have been swirling on social media for a few days. Internet users in Jining say that some WeChat groups have been banned to halt these online conversations.

Tony Tang, originally from Jining, but now a New York resident, told the South China Morning Post that he learned about the spread of COVID-19 cases to Huxi Prison in Yutai County nearly a week ago through hometown friends. But the Jining Disease Prevention and Control Center told the news outlet that they had no such information.

Tang tweeted on Sunday night about a potential coronavirus outbreak just south of Jining. Soon, someone knocked at his parents’ door.

“Within hours of me posting the message, security officials visited my parents who still live in Jining and asked them to tell me to delete the message. The speed of their response shows that they knew this was serious and [I felt something] was not normal,” he told the Post. 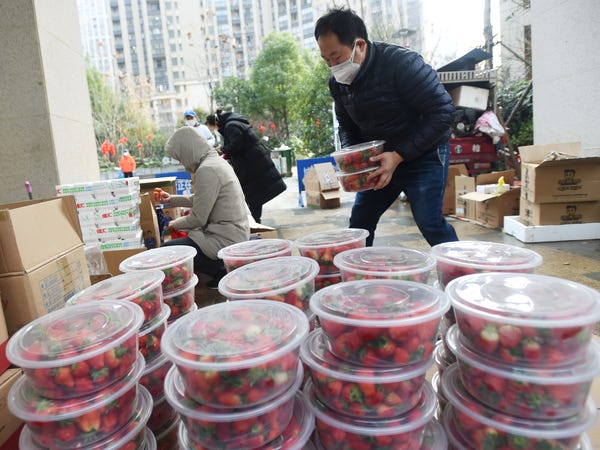 A man wearing a face masks sorts strawberries purchased by residents through group orders at a residential compound in Wuhan, Hubei province. Stringer/Reuters

According to state news agency Xinhua, deputy secretary-general of the Central Political and Legal Affairs Commission, China’s top law enforcement agency, is heading a team that will examine the Rencheng Prison cases. The Post said he promised “all out efforts” to quarantine patients and get appropriate medical care for those who are sick.

Meanwhile, penitentiaries across the nation have increased their screening of guards and officers to stop COVID-19 from entering “prison premises” Lei told the Post, adding that 28 teams have been dispatched to prisons around China to ensure compliance.

Authorities in Shangdong plan to “quickly set up a hospital” on the jail grounds, the Hubei Daily said, but many remain unconvinced.

“Prisoners are routinely denied access to adequate medical care even during normal times,” Yaqiu Wang, a China researcher at Human Rights Watch, told The New York Times. “Now with medical resources stretched to the limit in many areas in China, it is hard to imagine prisoners’ medical needs would be a priority of the government.”