By feedback@businessinsider.com Bill Bostock on February 21, 2020
This post was originally published on this site

A crowd of Ukrainians ambushed and attacked a fleet of buses transporting 72 evacuees from Wuhan, China, to a coronavirus quarantine hospital in Ukraine.

On Thursday morning, 45 Ukrainians and at least 27 nationals from South American countries landed at Kharkiv International Airport, in the central region of Poltava, after departing from Wuhan.

They took buses from the airport to a hospital in Novi Sanzhary. As they neared their destination they were set upon by dozens of protesters who had blocked a bridge and put burning tires in the road, according to Reuters.

The crowd then began hurling stones and bricks.

A smashed window is seen on one of the buses. Reuters

At least three buses had their windows smashed. Hundreds of armed police intervened to push back the protesters, and the buses were eventually able to pass and reach the quarantine.

Some of those onboard the buses waved Ukrainian flags in an attempt to plead for solidarity, according to Agence France-Presse (AFP.)

As they clashed with police, protesters chanted “shame on you” at the officers trying to prevent their attack.

Ukraine’s president, Volodymyr Zelensky, pleaded for the protesters to show empathy. He said “we are all human,” according to AFP.

“Most of the passengers are people under 30. They are almost like children to many of us,” Zelensky said. 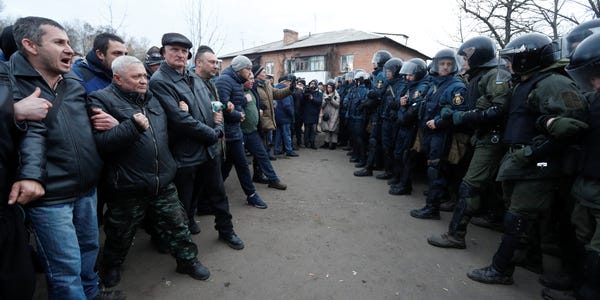 Demonstrators line up in front of Ukrainian law enforcement officers as they protest the arrival of a plane carrying evacuees from China’s Hubei province hit by an outbreak of the novel coronavirus in the village of Novi Sanzhary in Poltava region, Ukraine February 20, 2020. REUTERS/Valentyn Ogirenko

None of those onboard have been confirmed to have the virus, the BBC said, citing Ukraine’s health ministry.

Interior minister Arsen Avakov arrived at the scene and tried to calm protesters.

“So far,” one of the protesters replied.

Ukraine’s Health Minister Zoryana Skaletska wrote on Facebook that she would be joining them in quarantine as a show of solidarity. 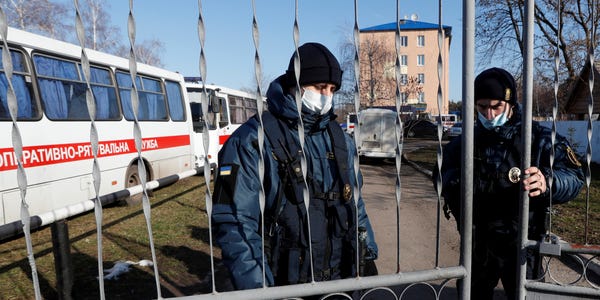 Members of Ukraine’s National Guard close the gate of a sanatorium where the evacuees from coronavirus-hit China’s Hubei province are quarantined, in the village of Novi Sanzhary in Poltava region, Ukraine February 21, 2020. REUTERS/Valentyn Ogirenko

“I hope that my presence there will calm those in Novi Sanzhary, as well as the rest of the country,” she said. “I want to emphasize: these people are our fellow citizens, they are not strangers to us. We live in the same country and we have to take care of their health and safety.”

Ukraine is yet to record a confirmed case of COVID-19. Worldwide, more than 2,200 have died, with more than 76,000 recorded infections.