By sbaker@businessinsider.com Sinead Baker on February 17, 2020
This post was originally published on this site

Fourteen US citizens who were evacuated from a Japanese cruise ship that had been quarantined over the deadly coronavirus tested positive before boarding a plane home, and had to travel in an “isolation box” at the back of the aircraft.

The passengers were among more than 300 US citizens on the Diamond Princess, which had been quarantined off the coast of Japan for more than 10 days until they were evacuated on Monday.

They tested positive after they left the ship and as they were traveling to their plane home, the US State Department and Department of Health and Human Services said in a joint statement on Monday.

A passenger stands on the balcony of the Diamond Princess, anchored at the Yokohama Port near Tokyo on Friday, February 7, 2020. AP Photo/Eugene Hoshiko

“During the evacuation process, after passengers had disembarked the ship and initiated transport to the airport, U.S. officials received notice that 14 passengers, who had been tested 2-3 days earlier, had tested positive for COVID-19,” it said.

The agencies also said the passengers had been evaluated, and “all were deemed asymptomatic and fit to fly before being processed for evacuation.”

When the test results were discovered, the 14 passengers were moved to a “specialized containment area on the evacuation aircraft to isolate them.” The State Department, after consulting with experts, allowed them to fly while isolated from other passengers.

Photos and video footage from the plane, taken by fellow evacuees, shows the portable bio-containment unit for those passengers. 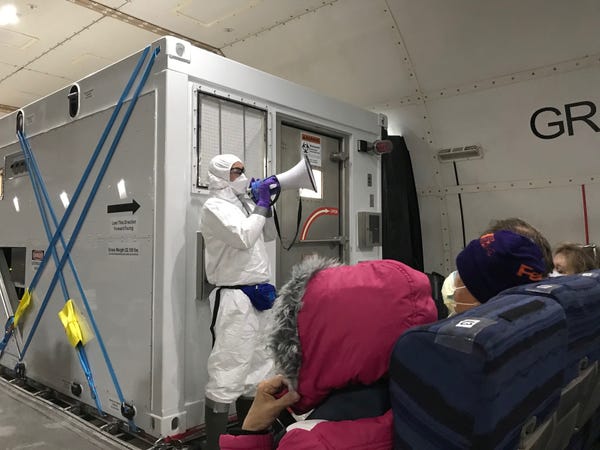 A health official talks to US passengers who chose to leave the Diamond Princess cruise ship in front of the bio-containment unit on their evacuation flight on February 17, 2020. Courtesy of Philip and Gay Courter/via REUTERS

“All passengers are being closely monitored by medical professionals throughout the flight, and any who become symptomatic will be moved to the specialized containment area, where they will be treated,” the State Department and Department of Health and Human Services said.

Those who do not show any symptoms or have positive test results will still be brought to military bases and be quarantined for 14 days, they added.

Four hundred and fifty-six cases of the virus were confirmed on the ship as of Monday morning — making it the place with the most infections outside China.

Those confirmed as infected are being treated on Japan’s mainland. Around 3,700 passengers were on board the ship in total.

Plans for the voluntary evacuation of US citizens from the ship on two chartered planes were revealed last week.

The US had previously said that people who tested positive would not be allowed on the flight and would get medical treatment in Japan — a position that appears to have been reversed, likely because the cases were only discovered after the passengers were on their way to the plane. 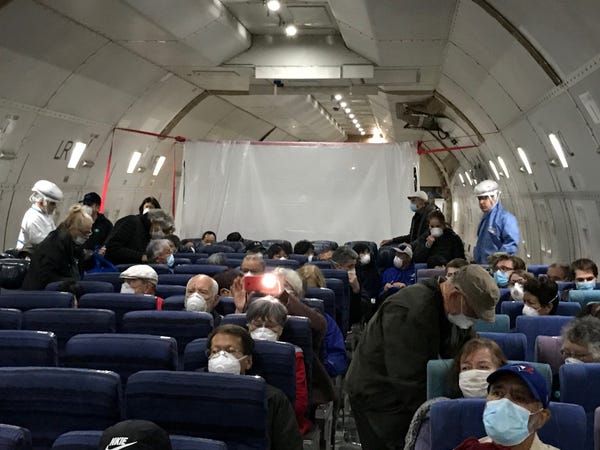 Passengers on the plane, which is filled with masked officials and plastic sheeting. Courtesy of Philip and Gay Courter/via REUTERS

Other Americans who had been identified as infected before the ship was evacuated stayed in Japan for treatment.

The ship’s quarantine is expected to end this week. But not every country is following the US’s lead and evacuating its citizens.

The UK is considering quarantining its citizens in hospitals in Japan rather than flying them home, The Daily Telegraph reported, noting anger from British citizens on board. 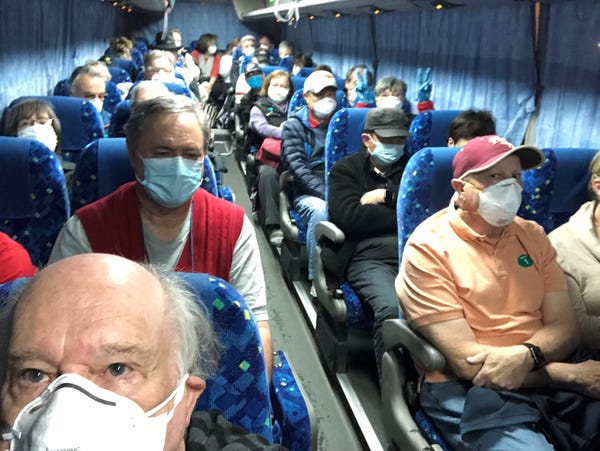 Passengers on the shuttle bus that brought them from the Diamond Princess to their plane to the US. Courtesy of Philip and Gay Courter/via REUTERS

Passengers on board the Diamond Princess had previously shared pictures of lives in quarantine, including their room service and the ways they coped with boredom.

It is not the only cruise ship that has been quarantined over the coronavirus.

The Westerdam spent five weeks at sea before a Cambodian port finally allowed it to dock, and health officials announced on Saturday that they found a case after hundreds of people were allowed to leave the ship and begin their travels home. 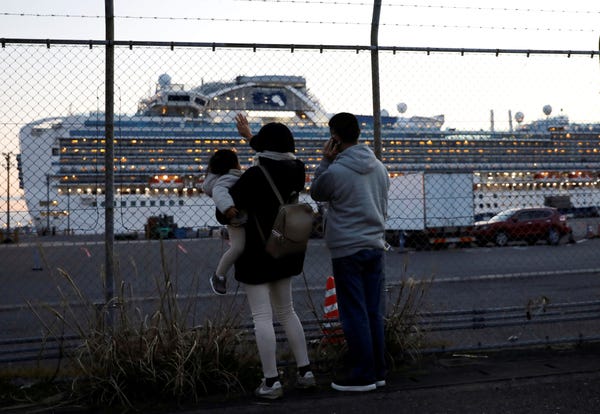 Family members of passengers onboard the cruise ship Diamond Princess wave and talk to them on the phone at Daikoku Pier Cruise Terminal in Yokohama, Japan, February 11, 2020. Reuters/Issei Kato

The virus has now infected at least 71,000 people and killed more than 1,770. The vast majority of cases and deaths have been in mainland China, but it has also spread to at least 25 other countries.

More from HealthMore posts in Health »