By cadaily on February 14, 2020
This post was originally published on this site

Sailors who showed up to a speech by President Donald Trump wearing patches playing off the commander in chief’s famous campaign slogan have been punished — along with some of their superiors — for violating a Pentagon order that bars troops in uniform from participating in political events.

Eighteen sailors and officers assigned to the Guam-based Helicopter Sea Combat Squadron 25 were informed days after Trump’s Memorial Day address on the amphibious assault ship Wasp that they were suspected of violating Pentagon policy. Nine of them had attended the speech sporting flight suits with red patches that said, “Make Aircrew Great Again.”

Journalists attending the speech posted photos of the patches on Twitter, prompting questions about whether the uniform devices violated Defense Department policy requiring troops to remain apolitical while in uniform. The patches featured the president’s likeness, along with the riff on Trump’s “Make America Great Again” slogan.

Military.com obtained a copy of the 103-page investigation into the incident, which was launched just days after Trump’s speech, through a Freedom of Information Act request. It found that, while the sailors didn’t intend for the patches to make a political statement, they still broke the rules.

The sailors’ officer-in-charge, a lieutenant commander, confiscated the patches immediately after Trump’s speech.

The Navy also took “appropriate administrative measures” against an undisclosed number of sailors and leaders involved in the incident, Lt. j.g. Rachel McMarr, a Navy spokeswoman in Hawaii, said.

A Navy official with knowledge of the cases said some sailors and officers faced nonjudicial punishments, but the charges were later dropped. The official spoke on condition of anonymity due to not being authorized to discuss private personnel matters. The personnel ultimately received administrative reprimands, which were carried out at the unit level. The severity of those punishments were not disclosed.

The reprimands were meant to “ensure the leaders and sailors involved understand requirements of DoD Directive 1344.10 and give due consideration to the heightened risk that actions by service members in uniform will be perceived as an official DoD position,” McMarr said.

Trump speaks to US servicemen aboard US Navy amphibious assault ship USS Wasp in Yokosuka, south of Tokyo, May 28, 2019. AP Photo/Eugene Hoshiko

The nine members of HSC-25 who showed up to the speech wearing the patches were naval helicopter aircrew personnel, ranging in rank from E-4 to E-6, according to the investigation. Documents show that five officers within the squadron, including the lieutenant commander who took the sailors’ patches away, were also suspected of violating Pentagon policy in connection to the patches. Also investigated were the leading chief petty officer and three other enlisted members.

That could lead to new Navy-wide rules on what patches will be approved for wear in the aviation community. Vice Adm. DeWolfe Miller, one of seven commanders to sign off on the probe’s findings, said he would work with the chief of naval personnel to “update uniform guidance regarding the wearing of patches to ensure the rich heritage and time-honored traditions of naval aviation are upheld in a manner that maintains the dignity of naval service.”

The patches weren’t the only source of controversy during Trump’s stop in Japan. The Navy’s handling of a White House request to hide a warship named for the late Sen. John McCain, a Navy war hero and frequent Trump critic, is the subject of a separate investigation.

Results of those findings have not yet been made public.

Last week, Defense Secretary Mark Esper issued new guidance on ethical conduct and political activities to all Defense Department personnel. Service members must steer clear of politics while carrying out official duties, Esper wrote, instructing all leaders to review the Pentagon’s policies and sharing the guidance with their troops.

“Maintaining the hard-earned trust and confidence of the American people requires us to avoid any action that could imply endorsement of a political party, political candidate or campaign,” the defense secretary added.

‘Today of All Days’

Days before Trump arrived on the amphibious ship Wasp, personnel began getting guidance and instruction on what to wear and how to act when the president arrived.

Navy personnel were told in all-hands messages to wear their camouflage working uniforms with eight-point covers. Guidance issued to Wasp leaders three days before Trump’s visit also listed the uniform of the day and hailed the event as “an excellent opportunity to … showcase the professionalism of our Navy and Marine Corps team.”

The HSC-25 sailors who showed up in their flight suits told investigators they hadn’t gotten the memos. That was despite confirmation that their email accounts were up and running ahead of the president’s visit.

The detachment’s officer-in-charge, the lieutenant commander, said he didn’t share guidance about the president’s visit with his personnel, because he didn’t think any of them would be attending.

About 500 Wasp sailors had been preselected to be in the audience that day. It wasn’t until the morning of Trump’s speech that some members of HSC-25 learned they could also attend the speech, investigation found.

That’s when a naval helicopter aircrewman 1st class, an E-6, gathered up the patches members of the squadron had been seen wearing since at least 2017. Once inside the hangar bay where Trump would speak, the sailor began handing out the patches to other aircrew members.

They were gathered near an F-35 joint strike fighter jet, and their patches drew immediate attention.

At least two of the sailors said they got Trump to sign their patches, and took a photo of the commander in chief holding one of them. 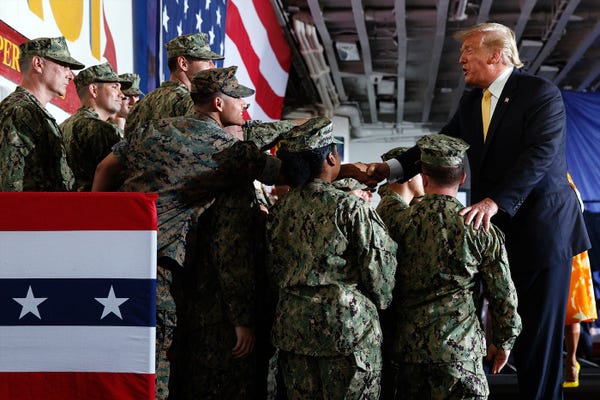 Trump greets troops after speaking at a Memorial Day event aboard the USS Wasp, in Yokosuka, Japan, May 28, 2019. AP Photo/Evan Vucci

An unnamed Navy commander later told one of the sailors they needed to remove the patches because they could be viewed as political statements. A sailor recalled the officer asking “why they would wear those patches today of all days,” according to the investigation.

It wasn’t the first time members of the squadron had been photographed wearing the patches. The Defense Department shared a photo of a sailor wearing the patch while helping evacuate families during Hurricane Maria on its official Twitter account in 2017.

Several said the patches had been worn in front of at least two former commanding officers: Cmdrs. Frank Loforti and William “Easy” Eastham. Loforti led the squadron from 2018 to 2019 and Eastham from 2016 to 2018.

The sailors had been given verbal approval to wear the patches on flight suits within squadron spaces, several members told investigators. Eastham once referred to the MAGA patches as “in good taste,” one recalled, according to documents.

The detachment’s senior leaders said they’d known about the patch for months or years, but they weren’t aware that any sailors wore them at Trump’s speech until it was over. A lieutenant junior grade informed the officer-in-charge that some of the aircrew had been told to remove their patches by an unnamed commander who saw them there.

That’s when the lieutenant commander summoned the nine to his stateroom, where he confiscated the patches. As of July 13, he confirmed to investigators they were still in his possession.

The probe into the patches is one of several recent cases of troops’ political behavior in uniform coming under scrutiny. In 2017, questions were raised when troops in Iraq and Germany asked Trump to sign red “Make America Great Again” baseball caps. Officials said at the time there was no rule against service members bringing personal items for the president to sign.

And in August, the South Carolina National Guard said it was reviewing whether a major would be punished for attending a political rally for Joe Biden while in uniform and telling him she prayed he would become president.

Editor’s note: This story was updated with additional detail about the nature of the administrative punishments the sailors and officers received.