By mfriel@businessinsider.com Mikhaila Friel on February 14, 2020
This post was originally published on this site

It’s been just over a month since the Duke and Duchess of Sussex announced their departure from the royal family.

Now that Meghan Markle and Prince Harry are no longer carrying out engagements on behalf of the Queen, the spotlight has fallen on other members of the family.

Not only do fans want to know Kate Middleton and Prince William’s reactions to “Megxit,” but they also want to see what the family will do next. Here’s everything we know so far.

So far the Queen has been the only member of the royal family to release an official statement about Harry and Markle’s departure.

“Harry, Meghan, and Archie will always be much-loved members of my family,” Her Majesty said.

“I recognize the challenges they have experienced as a result of intense scrutiny over the last two years and support their wish for a more independent life.”

Middleton and William are yet to speak on the matter. However, they did laugh at Brad Pitt’s joke about Harry leaving the UK at the BAFTAs earlier in January.

Although fans may never know the personal impact the Sussexes’ departure has had on certain family members, it does appear as though they are portraying a united front.

William, Middleton, Prince Charles, and Camilla stepped out for a rare joint engagement on Tuesday. As photos of the couples playing wheelchair basketball at the Defence Medical Rehabilitation Centre surfaced, the British press dubbed them “the new Fab Four.”

“You’ve got four safe pairs of hands here. William and Kate do a lot of great things, but they have their own way of doing it, a bit more reserved [than Harry and Markle],” royal editor Russel Myers said during an appearance on British talk show “Lorraine.”

“Kate and William can’t do any wrong at the moment, and to have the elder two beside them worked really well. There was a lot of interaction between the two of them,” he continued.

William and Charles celebrate during a game of basketball. AP Images

Myers added that the interaction between Charles and William was somewhat unusual to see.

“You don’t expect royal couples to hold hands, and then you have Charles coming up behind William, shaking him while he was playing basketball.”

The Duchess of Cambridge has kept incredibly busy since “Megxit” — and according to a royal expert, it’s no coincidence.

The royal, who flew from London to Belfast to Aberdeen on Wednesday to promote the survey, has attracted 200,000 responses.

According to a press release from Kensington Palace, this makes it the biggest ever open survey of its kind in the UK. 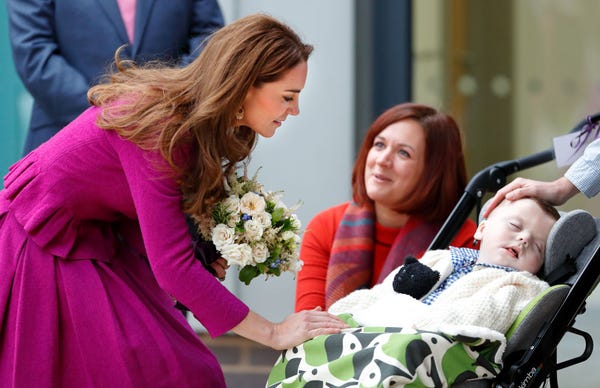 Marlene Koenig, an expert on British and European royalty for History Extra, told Insider that this year the duchess is coming into her own.

“I’ve been a critic, and been saying ‘Okay, this is the year Catherine’s going to step forward’ and then years go by … and she was getting the ‘Lazy Katie,’ ‘Waity Katie,’ all those types of things,” said Koenig, author of “Queen Victoria’s Descendants.”

“I think it may have been a good thing, in hindsight, and we’re going to see her emerge from that chrysalis and have her time to shine in her own way,” she said.

Mail Online reports that while appearing on British morning show “This Morning” this week, Tominey said: “This is a picture of the monarchy moving forward, but the pressure is really on the Duchess of Cambridge to make the royals move into the future.

“Yes, Prince William is a star but it’s been all about Kate lately and she’s considerably raised her game.

“She’s now carved her own path focusing on early years learning. She wants to commit her working life to childhood and how it affects adult life. She’s been doing it in secret for eight years,” she said.

Middleton has even recently been given the nickname “the Children’s Princess” by both fans on social media and British press including the Express because of her work with children’s patronages.

Koenig added: “I mean, she’s very different from Meghan and we shouldn’t criticize either one of them for what they do.

“She knows what her position is going to be, and she’s following the rule book.”

Why the Queen’s eldest grandson, Peter Phillips, doesn’t have to follow royal protocol during his divorce