By feedback@businessinsider.com Bill Bostock on January 28, 2020
This post was originally published on this site

Villages in central China are going to extreme measures to cut themselves off from the deadly Wuhan coronavirus.

The villages visited by Sky were about 600 miles from Wuhan, the city in Hubei where the virus originated.

The virus, known as 2019-nCoV, broke out in Wuhan in December and as of Tuesday had killed 106 people, infected 4,500, and spread to more than a dozen countries, according to China’s National Health Commission.

Handwritten signs suspended over roads into some villages visited by Sky News warned: “No outsiders allowed in.”

A defensive wall erected in a village in Hubei. Sky News

“Our village built this,” one villager told Sky News, referring to a tall brick wall across a main road. The villager said the wall was meant “to stop outsiders coming to our village, to reduce the number of people coming in.”

In one case a portable cabin was winched into a village in Hubei to act as a guardhouse at a checkpoint. A local resident Sky News identified as Yan Yang said: “It’s because of the epidemic. I don’t know how long it will last.”

“No one knows how the epidemic will process,” the person added. “There’s no policies from the top yet.” 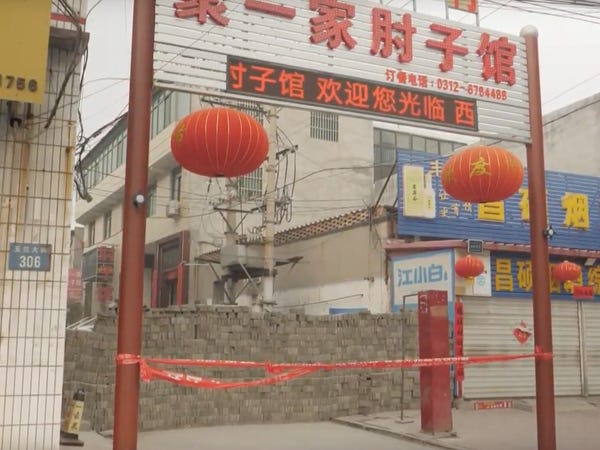 One of the walls erected in Hubei. Screenshot/Sky News

He went on: “I can’t say I’m not worried. But no one has another method.”

While the Chinese government has set up official checkpoints to screen people for the virus, these walls and barriers have been set up without the directive of the government, according to Sky News.

Another image of people building a wall across a main road circulated on Chinese social media on Tuesday and spread to Twitter.

Business Insider has not been able to independently verify the photo from social media. 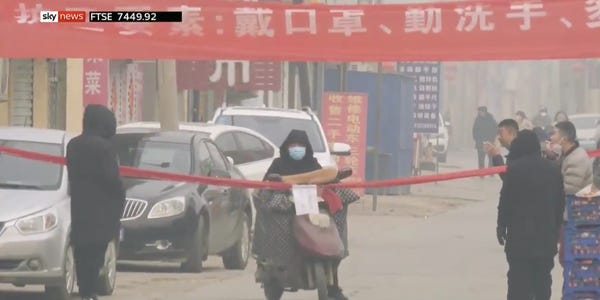 A paper sign hanging on a red barrier in a village in Hubei said “No outsiders allowed.” Sky news

China’s neighbor Mongolia enforced a ban on people crossing the border from China on Tuesday, according to the country’s Montsame state news agency.

The World Health Organization convened an emergency meeting with Wuhan officials on Monday but said last week that it was too early to call the outbreak a global health emergency.