Wuhan, China, is scrambling to build a hospital in just 6 days to treat coronavirus patients its health system gets overwhelmed

By sbaker@businessinsider.com Sinead Baker on January 24, 2020
This post was originally published on this site

The Chinese city of Wuhan is rushing to build a brand-new hospital within six days to treat patients of the coronavirus that has killed at least 26 people across the country and is overwhelming the quarantined city’s health system.

The 2019-nCoV virus, which has infected more than 870 people as of Friday morning, originated in Wuhan. China has closed down public transport links in the city and at least nine others, sealing off a total of 30 million people.

Doctors in Wuhan say that people have to queue for hours for medical attention, that screening the disease is difficult, that there is not enough protective gear, and that some doctors were told not to go to work over fears they could catch the virus.

Video footage shows people packed in small hallways as they wait for treatment.

Wuhan authorities said Friday that a new, 1,000-bed hospital is being built for coronavirus patients to “address the insufficiency of existing medical resources,” the Associated Press reported.

Patients with the coronavirus are currently being treated in hospitals and fever clinics across the city.

The new hospital is to be built in six days, and be put to use on February 3, state-run news site The Paper reported, citing state media outlet People’s Daily.

The hospital will be made from prefabricated buildings — making it quicker and cheaper to build — on the outskirts of the city, People’s Daily reported.

The strategy is a repeat of how China dealt with the outbreak of SARS in 2003, which killed more than 770 people. 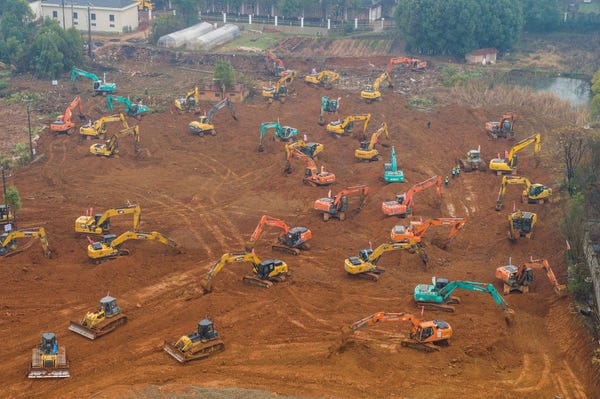 Excavators at the construction site of a new hospital in Wuhan on January 24. STR/AFP via Getty Images

People’s Daily called that hospital “a miracle in the history of medicine.”

The ongoing Wuhan coronavirus can spread from human to human, and has already spread to some healthcare workers treating the infected.

It has spread to at least eight other countries: the US, Japan, South Korea, Thailand, Taiwan, Singapore, Vietnam, and Saudi Arabia.

This map shows where it had spread as of Thursday:

These countries have quarantined people who are infected, and are monitoring those who have been in close contact with the infected.

Other countries, including Scotland and Finland, have suspected cases.

Countries around the world are screening passengers in airports for symptoms, and have quarantine procedures in place. 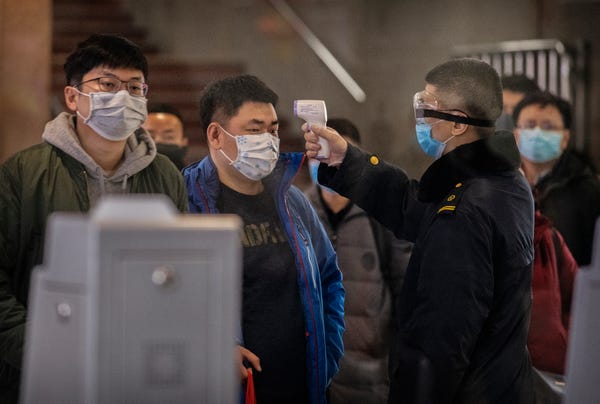 Passengers who just arrived on a train from Wuhan are screened for coronavirus in Beijing. Kevin Frayer/Getty Images