By acollman@businessinsider.com Ashley Collman on January 23, 2020
This post was originally published on this site

As the Wuhan coronavirus death toll rose to at least 18 on Thursday, the Chinese government is facing questions over its vice grip on the flow of information in the early days of the outbreak.

In early January, Wuhan police said they had arrested eight people for spreading “rumors” about what was then a mysterious pneumonia causing serious complications in patients.

When the coronavirus made national headlines, more and more journalists started reporting being detained or threatened with arrest by Chinese authorities while reporting on the outbreak.

The Wuhan outbreak immediately hearkened back to the SARS epidemic in the early 2000s, which the Chinese government tried to cover up. The two viruses are in the same family, which also includes the common cold and pneumonia, but Wuhan so far is much milder than SARS.

While the government was almost immediately forthcoming with the international community about this outbreak, its actions in suppressing information at home have left some experts concerned that it made the situation a lot worse.

The coronavirus has spread to eight other countries outside of China including Thailand, Japan, South Korea, Taiwan, Vietnam, Singapore, Saudi Arabia, and the US. Ruobing Su/Business Insider

Aside from the actions of the Chinese government, Eric Toner, a senior scientist at Johns Hopkins University, said the virus itself still has a lot of unknowns that heath officials need to figure out.

“The information that has been coming out of China so far is incomplete,” Toner told Business Insider’s Aria Bendix. “There’s an awful lot we don’t yet know.”

Chinese officials first reported the outbreak to the World Health Organization on December 31. Early on, officials cracked down on talk about the illness online. Just four days later, Wuhan police said they had summoned eight people for spreading “rumors” about the virus.

According to Poynter, the people who were arrested posted on the social networking site Weibo and/or other messaging apps that SARS was back.

Poynter tried to figure out what had happened to the eight people, but struggled. It reported that the state-owned Global Times cited an anonymous police source who said the group was not kept in custody or punished.

There have also been concerning reports of journalists being detained or threatened with arrest while reporting on the coronavirus in Wuhan.

The Hong Kong news outlet TVB reported on January 14 that a group of journalists, including a reporter from their outlet, were detained for hours while covering the outbreak at a Wuhan hospital that has been treating patients.

According to the report, the journalists were at Jinyintan Hospital to get a briefing in the morning when a “group of plainclothes policemen” confronted them and started asking questions.

Time reporter Charlie Campbell recalled a similar incident while reporting at the seafood market pinpointed as the source of the outbreak. He said he was “repeatedly threatened with arrest while observing the scene from the street.”

“A police officer at the market would only confirm they were continuing ‘analysis,'” he wrote. 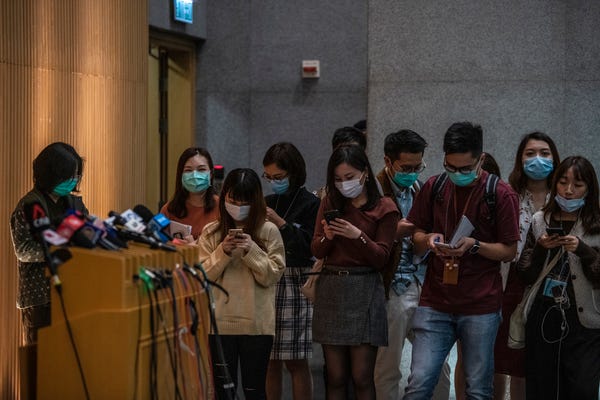 Reporters wear surgical masks as they attend a press conference about the coronavirus on January 22, 2020 in Hong Kong. Vernon Yuen/NurPhoto via Getty Images

China has been more transparent with the international community with this outbreak than it was with SARS. Then, the government underreported cases until a whistleblower doctor revealed the truth.

But when it comes to giving information to its own people, the message from China has been lacking.

In the early days of the outbreak, officials downplayed the seriousness of the virus, saying that it was controlled, according to The New York Times.

Poynter reported that officials initially said that the virus came from animals and could not be spread from human to human, something that later proved to be incorrect.

Just days before the entire city was quarantined, Wuhan hosted a major banquet involving 40,000 families in order to set a world record, The Times reported.

The virus wasn’t even front page news on the Wuhan Evening News, the city’s bestselling newspaper, from January 6 to 19, according to the Financial Times.

It was during this time that the city was hosting annual meetings for top municipal and provincial officials (January 7-17). Dali Yang, an expert on Chinese bureaucracy at the University of Chicago, told FT that this event was most certainly a factor in the toned-down government response.

“This is a major factor that the authorities in Wuhan city sought to project an air of calm and most likely delayed taking action to stop the spread of the Wuhan coronavirus,” Yang said.

A public health expert, who asked not to be named, told FT: “There is a question of whether the alert [was] in place sufficiently quickly this time.”

While the official order is that anyone who hides infections will be “forever nailed to history’s pillar of shame,” the actions taken by the government so far are telling a different story.

“The authorities are sending a signal, which is that only the government agencies can talk about the epidemic,” Yu Ping, a former Southern Metropolis Daily reporter, wrote on his personal blog, according to The New York Times. “All other people should just shut up.”

The crackdown on misinformation has also led to some discontent among average Chinese citizens talking about the outbreak online.

“Why is the government scared of public discussion?” one Weibo user wrote, according to Time. “They are slow to handle the crisis, but fast to shut people up.”

“If the government wants us to trust them, they should be trustworthy, first,” another Weibo user said. “If we have lost confidence in them, the government needs to reflect on itself instead of shutting people up.”