After months of devastating bushfires Australia is finally getting rain, but it won't stop the fires, and is bringing new extreme weather conditions

By sbaker@businessinsider.com Sinead Baker on January 16, 2020
This post was originally published on this site

Rain and hail is falling in parts of Australia, but forecasters fear it won’t stop the country’s devastating bushfires, and could create new dangerous weather conditions like flooding and landslides.

Storms have brought rain and hail to areas like Victoria and New South Wales, a change in weather patterns in Australia, which has been suffering unprecedented fires for months after a prolonged season of drought.

The fires have killed at least 29 people, killed an estimated one billion animals, and burned more than 25 million acres of land.

Fire services said this precipitation will help to weaken fires in those areas, though it won’t actually put them out.

To make matters worse, the rain that has fallen so far has caused some flooding and damage. Forecasts suggest the flooding could get even worse, and cause even more devastation after months of fires.

Lightning from the storms has also in some case started new fires, CNN reported.

New South Wales’ Rural Fire Service tweeted on Friday that “although this rain won’t extinguish all fires, it will certainly go a long way towards containment.” It said that 85 fires were still raging across the state, with 30 still out of control.

The fire service had looked toward to rain on Monday, when it tweeted that, if forecasts held true: “This will be all of our Christmas, birthday, engagement, anniversary, wedding and graduation presents rolled into one.”

This new weather is just a small sign of the conditions that forecasters and emergency services are warning of if more rain falls as expected.

Heavy rail on burnt areas could create flash flooding and mudslides, while the rain is unlikely to reverse the drought conditions

Kevin Parkyn, a senior meteorologist with Australia’s Bureau of Meteorology, said on Wednesday: “This is a day that we are quite concerned about.”

He told reporters about the risks of damaging winds, heavy rainfall and large hailstones around Melbourne, Reuters reported.

“Thunderstorms are a bit of a double-edged sword. While they can bring some much-needed rain, [the rain] can also come down in very fast, high quantities,” he said.

“By Monday, a cut-off low pressure system will bring widespread heavy rain and we could see widespread severe weather with damaging wind gusts, further flash flooding and we could even see supercell storms,” he said.

“So there’s going to be some big rain.” 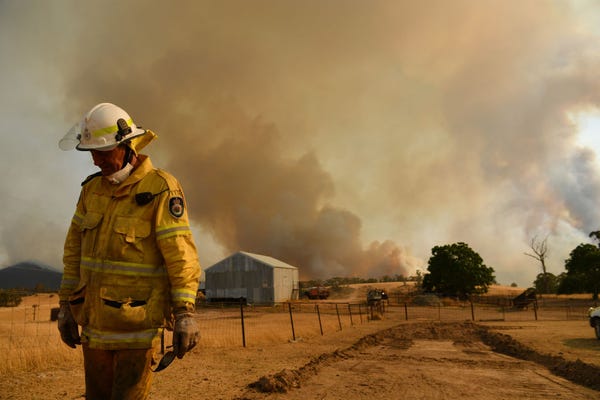 He also warned of severe weather in Victoria: “These storms are slow moving and there’s a high amount of moisture so that means flash flooding will be the main threat from these storms over the next few days.”

“In areas impacted by fires where vegetation has been destroyed, water from heavy rainfall can flow into riverbeds and we could see run-off in areas we wouldn’t normally, resulting in flash flooding.

And Paul Bailey, the assistant commissioner of the New South Wales State Emergency Service, also warned of the potential effects of the rain: “While the rain is welcomed, heavy rainfall and storms in fire affected areas can lead to dangerous conditions such as a higher risk of flash flooding, falling trees and landslips.

“In areas impacted by fires where vegetation has been destroyed, water from heavy rainfall can flow into riverbeds and we could see run-off in areas we wouldn’t normally, resulting in flash flooding. 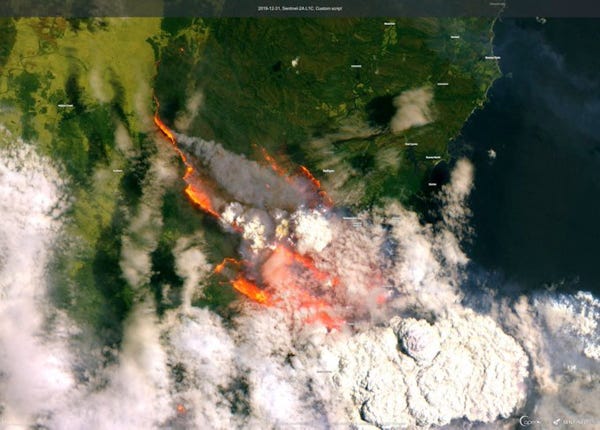 A satellite photo of Bateman Bay on the southern coast of New South Wales, Australia, on December 31, 2019. Copernicus EMS

“The NSW SES is also asking residents in fire affected areas to watch for possible landslips as the ground and roads can be damaged, therefore creating a higher risk of a potential slip.”

Australia’s Nine News reported that some neighborhoods have already been hit by a month’s worth of rain in just a few hours.

Rain is also forecast for areas like Sydney, but less is forecast for some areas where the fires are biggest.

And the Australian Bureau of Meteorology warned on Thursday that more rain than what is forecast will be needed to  end the country’s severe drought, which has been running for three years.

Ben Shepard, a spokesman for the NSW Rural Fire Service, said rainfall was “brilliant” but added: “We’re under no illusion, though, that this will break the drought,” The Sydney Morning Herald reported.