By mfriel@businessinsider.com Mikhaila Friel on January 14, 2020
This post was originally published on this site

Meghan Markle has dealt with racism in the British press since before she and Prince Harry even confirmed their relationship to the world.

In 2016, Prince Harry highlighted and foreshadowed the treatment that was to follow the Duchess of Sussex throughout her royal career, calling out the press for the “racial undertones” of articles written about the then-actress.

The Duke and Duchess of Sussex in South Africa. Pool/Samir Hussein/WireImage

“His girlfriend, Meghan Markle, has been subject to a wave of abuse and harassment,” said a spokesperson for Prince Harry at the time. “Some of this has been very public — the smear on the front page of a national newspaper; the racial undertones of comment pieces; and the outright sexism and racism of social media trolls and web article comments.”

Two years later, and the Duke and Duchess of Sussex have announced that, as part of their “step back” from the royal family, they will no longer be co-operating with the Royal Rota.

This is a system which allows a rotation of royal reporters from British newspapers to attend and report on the royal family’s engagements.

The UK outlets involved in this system include The Daily Express, The Daily Mail, The Daily Mirror, The Evening Standard, The Telegraph, The Times, and The Sun, as noted on the Sussex Royal website.

Markle is often subjected to double standards by the press

Although the couple did not directly cite racism as a reason for the change, they did write on their website that they “believe in a free, strong and open media industry, which upholds accuracy and fosters inclusivity, diversity, and tolerance.”

And there’s no denying that some of these publications have been accused of double standards when it comes to how the duchess is described in comparison to her sister-in-law, Kate Middleton. 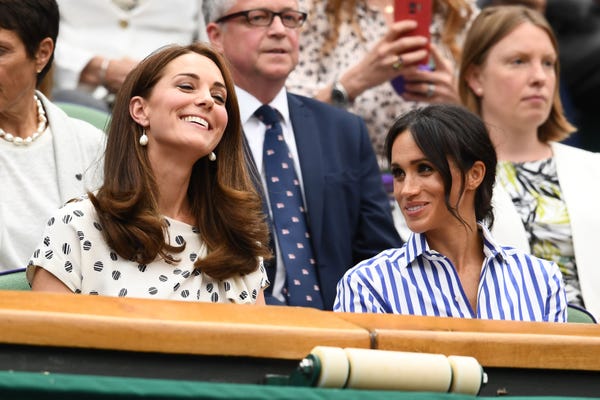 The Duchess of Cambridge and the Duchess of Sussex attended Wimbledon together in 2018. Clive Mason/Getty Images

“Over and over again, the press tears Meghan apart for crossing her legs, saying it’s a breach of protocol,” royal commentator Kristen Meinzer told Insider. “But do a quick Google image search of ‘Queen crossing legs,’ ‘Camilla crossing legs,’ ‘Di crossing legs,’ etc., and you’ll find dozens if not hundreds of photos of royals at official events crossing their legs.”

She added that Markle wouldn’t “be facing any of these double standards if she were white.”

Asked about Markle and Harry’s decision to leave the royal family — and rota system — behind, Meinzer said: “I can see where they would be fed up with how things currently stand.

“I understand their desire to escape the Royal Rota system — which essentially gives equal weight and credence to a handful of legitimate publications and several gossip rags.

“The UK tabloid press has been relentlessly racist and sexist toward Meghan —  a fact that her husband, the women MPs of Parliament, and many legitimate press outlets (including Insider) acknowledge,” she added.

There’s still a long way to go before these issues are solved, but Harry and Markle are taking important steps forward

However, this type of behavior is owed to far more than just headlines.

Ayesha Hazarika, editor at the Evening Standard, says many women have been asked as guests on live TV to debate racism in the British media, only to be told “it’s all in our heads.”

“Shout out to all my sisters of color who have been summoned on national broadcast to be told there’s no racism & it’s all in our heads & then have to deal with the fallout here,” she wrote on Twitter.

Kerry Daynes, a Consultant Forensic Psychologist who often appears in the media, says she has been asked questions that are purposefully designed to achieve a negative and misleading response about Markle.

“I have been asked (by British, more right-wing media) to comment on Harry and Meghan in my capacity as an expert in coercive control,” Daynes told Insider.

“I have been asked leading questions along the lines of ‘can you confirm that isolating someone from their family is a tactic used by controlling partners?'”

Daynes added that she thinks racism could be a factor behind this behavior.

“I’m not an opinion-for-hire and am certainly not prepared to make wild and unsubstantiated speculations,” she added. “I think I have a professional and personal responsibility not to get involved in what I see as mass media bullying.

“I am sure that this is underpinned by a number of factors, not least anger and resentment towards Meghan Markle — who is seen as an outsider and ‘other’ to us. I’m sure that there are racist values driving this in some quarters,” she said.

Although it’s unlikely Harry and Markle will be able to put an end to stories like these, their new media regulations mean they will get to handpick the organizations they work with from now on.

On the media section of their website, the duke and duchess write that they plan to “engage with grassroots media organizations and young, up-and-coming journalists.”

They added that they will invite specialist media to specific events, as well as “provide access to credible media outlets focused on objective news reporting to cover key moments and events.”

“This new chapter in their lives will allow them to work more closely with grassroots and legitimate press outlets,” Meinzer told Insider.

“It will allow them to use their talents, ambitions, and hearts in bigger, broader ways. And I hope it also means that they’ll be happier and face less abuse than they have up until now.”

Meghan Markle is being criticized for doing the same things that Kate Middleton is praised for, and a royal expert says it wouldn’t be happening if she were white

Harry and Meghan’s big ‘step back’: This is what it looks like when a monarchy can’t hold itself together

Published in Entertainment and World