Mysterious automated calls, vanished relatives, and sinister Facebook comments: How China intimidates Uighurs who don't even live in the country

By ama@businessinsider.com Alexandra Ma on December 8, 2019
This post was originally published on this site

China’s unprecedented oppression of Uighur Muslims goes beyond the borders of Xinjiang, the western Chinese region where most of the ethnic minority live, former residents told Business Insider.

Under President Xi Jinping, China is waging a widespread counterterrorism campaign on Xinjiang, also known to Uighurs as East Turkestan. It is a paranoid move in response to a spate of ethnic riots between Uighurs and Han Chinese, the dominant ethnic group in the country, ten years ago.

The Communist Party sees Uighurs’ religion — Islam — as a threat, and often conflates it with religious extremism.

For this reason, China apparently feels the need to control the Uighur diaspora outside the country in case they return home and carry out attacks.

Police patrol on a scooter as an ethnic Uighur boy stands in his doorway in the old town of Kashgar, Xinjiang, in June 2017. Kevin Frayer/Getty Images

Leaked classified documents, published by the International Consortium of Investigative Journalists last month, showed a concerted effort by regional officials to keep a close eye on Uighurs with foreign citizenship, wherever they are.

“For those still outside the country for whom suspected terrorism cannot be ruled out, the border control reading will be carried out by hand to ensure that they are arrested the moment they cross the border,” one government bulletin said.

“For those … whom suspected terrorism cannot be ruled out, they should first be placed into concentrated education and training for examination,” it added, referring to tightly-secured detention camps in the region, where former inmates say they are physically and psychologically tortured. 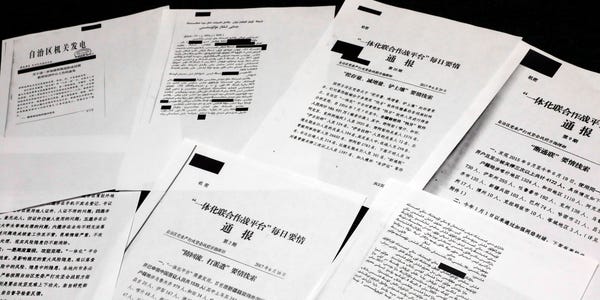 Copies of Chinese government documents that were leaked to a the International Consortium of Investigative Journalists displayed in November 2019. Associated Press

‘Family and friends suffer the consequences’

Several members of the Uighur diaspora told Business Insider they’ve also been spooked by China without even having to step foot in the country.

Rushan Abbas, a Uighur activist living in Herndon, Virginia, discovered last September that her sister had been disappeared by Xinjiang authorities six days after she spoke out against China’s human rights record. She still has no idea of her whereabouts.

“My sister’s story is not unique. China harasses Uighurs in the diaspora’s relatives back home, presenting them with heartbreaking choice: Keep silent about the horrific violations of human rights, or let your family and friends suffer the consequences for your choice for speaking out,” she said. 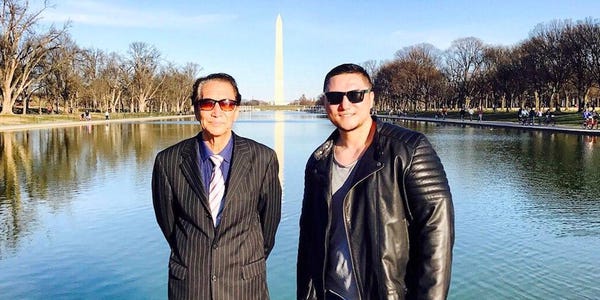 Abbas is not the only foreign Uighur who has been punished in Xinjiang for their actions outside the region.

Bahram Sintash, a Uighur-American living in Chantilly, Virginia, has been campaigning for his father’s release from the Xinjiang camps since October 2018. He has called on the Chinese government to reveal the whereabouts of his father, a retired magazine editor, through social media, protests, and speaking to journalists.

Sintash has been living in the US since 2008, but continued to visit his family in Xinjiang until 2015, when his Chinese visa was inexplicably revoked. That same year, he had opened a company in Urumqi, Xinjiang’s capital city, to provide fitness supplements and workout plans to Uighurs in the region.

Sintash requested anonymity for his company to protect its former employees. But he said the business flourished, and had earned close to a million dollars.

That success came to an end in October 2018 — exactly two days after Sintash spoke to Radio Free Asia about his father’s disappearance for the first time. 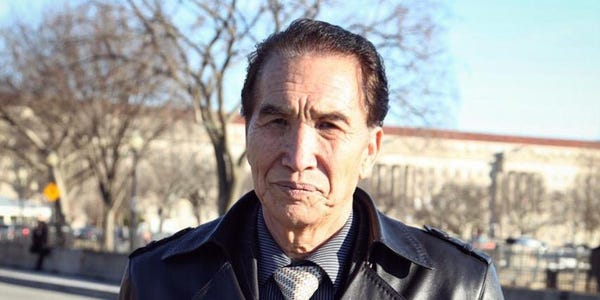 Multiple police officers went to the company’s office in Urumqi, took photos of every corner of the office, and told employees to leave as soon as possible, Sintash told Business Insider.

Shortly after the raid, police officers further questioned his colleagues, shut down his office, storage warehouse, and corporate social media accounts, he said.

“The police warned my partners to stop communicating with me and told them I was the enemy of the country living overseas,” Sintash said.

“I couldn’t get my money back from the region,” he added. “I can no longer contact any business partners or my teammates or my customers.” 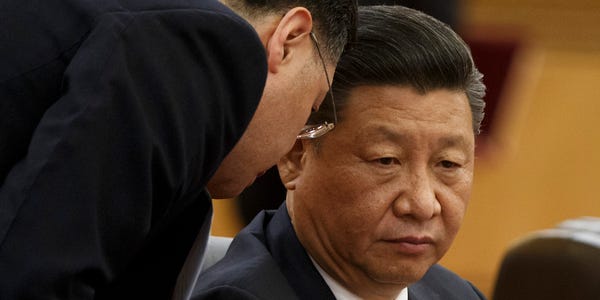 Chinese President Xi Jinping at the Great Hall of the People, Beijing, in November 2018. Thomas Peter/Getty

Sintash said he learned the news of his company’s collapse not from any official correspondence from Xinjiang authorities, but from one of his customers.

There’s no other way to verify it: His mother blocked him on WeChat last year for fear of getting in trouble with authorities, and all his phone calls to regional authorities about his father have gone unanswered.

As some Uighurs lose touch with their family on the phone, others have received menacing messages from Chinese-speaking agents. 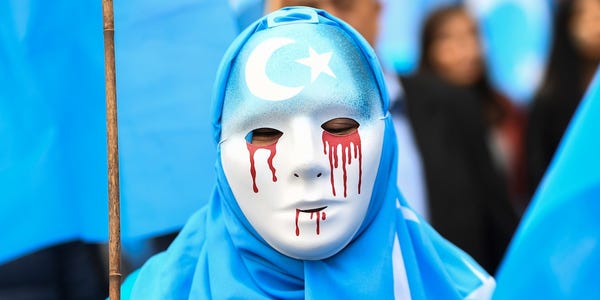 A protester wears a mask painted with Xinjiang or East Turkestan’s flag and tears of blood in Brussels in April 2018. Emmanuel Dunand/AFP/Getty

A female caller had identified herself as the Chinese embassy and told her to pick up some documents. Mahsut told Business Insider that even as she kept blocking the numbers calling her, she kept receiving the same automated calls from other numbers.

It’s not clear how the caller got Mahsut’s phone number, what documents she is referring to, and why Mahsut was receiving these calls. Earlier this year she publicly questioned China’s claim that it had released most inmates from Xinjiang’s detention centers, telling Agence France-Presse she knew of a cousin and two friends still in the camps.

Listen to one of the recordings Mahsut received below, accompanied with a rough translation of the message verified by Business Insider:

The Chinese Embassy in Ottawa told Business Insider this call was a “telecommunications fraud,” calling the caller “law breakers [who] use technical means to disguise phone numbers as embassies and consulates.” It added that the alleged scam is “not targeted at a specific group of people.”

Some 30 members of the Uighur diaspora in Norway have received dozens of automated calls from phone numbers connected to the Chinese embassy in Oslo, Al Jazeera reported last month.

One of the Uighurs, a naturalized Norwegian citizen, said she started receiving the calls after attending an anti-China rally on October 1.

The Chinese embassy in Oslo denied the calls in a similar manner to the London embassy, saying they were part of a scam.

Uighurs living in the US and France also told The Daily Beast and Foreign Policy last year that they had been asked for personal information including license plate numbers, bank details, ID photos, and marriage certificates — and threatened harm to their families in Xinjiang if they did not comply. 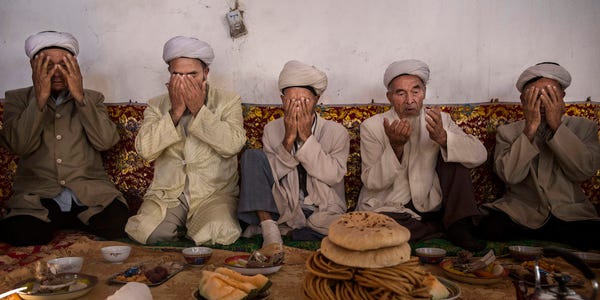 Uighur men pray before a meal during the Corban Festival, also known as Eid al-Adha, in Turpan, Xinjiang, in September 2016. Kevin Frayer/Getty

Sintash, the fitness company owner, has also received messages in Chinese threatening to harm his family. 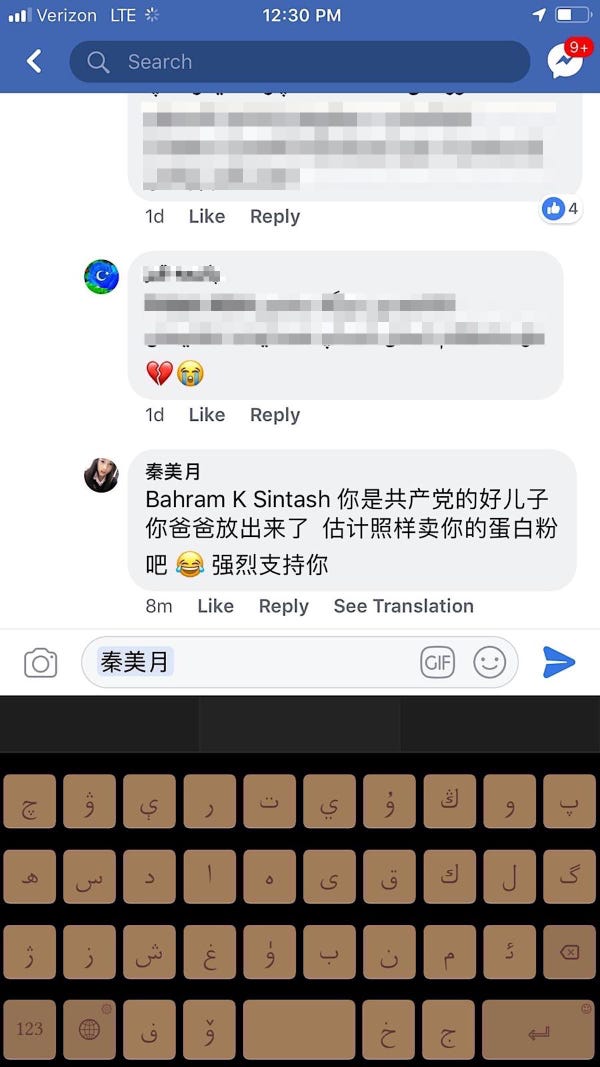 In January 2019, he received a comment in simplified Chinese on Facebook, in response to a comment he had left in the Uighur language on another person’s page.

“You are a good son of the Chinese Communist Party. Your father has been released now,” the comment read, without providing any evidence.

“I reckon you can keep selling your white powder [crying-eyes emoji],” the comment continued, in what Sintash took to mean his fitness supplements. “Strongly support you.”

The account was registered under a Chinese name, and its profile photo was of a young Chinese woman.

“What I understood [from the comment] was: ‘Keep obeying the Chinese Communist Party and shut your mouth. Your father is in our hands,'” Sintash told Business Insider.

“I felt threatened by the CCP.”

Trolling people is not a new Chinese tactic. The country’s propaganda department pays some two million people to publish pro-government posts and attack critics on social media, a Harvard University report found in 2016.

These commenters are known as the “wumao dang,” which translates to “50 cent party” in Chinese — a reference to the amount of money in yuan they are allegedly paid per post. That’s about $0.07.

‘Your mother has died’

Another bizarre run-in with Chinese speakers took place in late October, when Sintash and other Uighur activists staged a protest outside the Capital One Arena in downtown Washington, DC.

As Sintash and 13 others held up signs and chanted slogans, a Han Chinese man — the largest ethnic group — went up to them and said: “Your mother has died” five times.

Video shows the group looking at the man, puzzled, as he walked away.

“He was a pro-CCP Chinese citizen who could’ve said anything to define [himself] … but he chose to tell us ‘your mother has died,'” Sintash said.

“I was shocked at the time. I never expected someone to deliver such an evil message while in the United States.”

Those words were particularly jarring to Sintash, who hadn’t spoken to his mother or anyone else in his family since February 2018. To this day, he still has no idea who that man was. 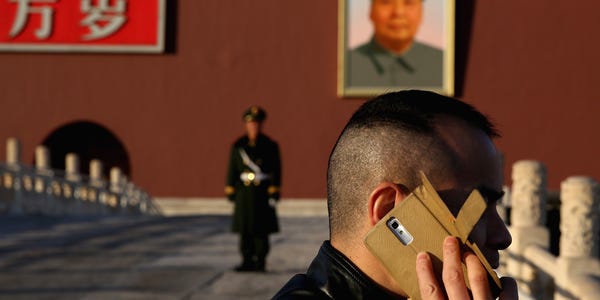 A man on his phone in Tiananmen Square, Beijing. Feng Li/Getty

Will these threats stop Uighurs from speaking out for their families trapped in China? Probably not.

“They cannot control us,” Sintash said. “China looks for people who are weaker mentally. I am different … I have the US behind me.”

“I never cared about politics in the past,” he added. “What China is doing to the people in the region — we have to speak up. We have to stand up.”