A UFC heavyweight was winning every round until he got hit with a punch so hard it left his lip hanging off his face, then lost by knockout

By feedback@businessinsider.com Alan Dawson on December 8, 2019
This post was originally published on this site

Alistair Overeem was winning every round of his UFC fight but then got hit with a punch so hard it left his lip hanging off his face and lost by knockout.

If the heavyweight fight at the UFC on ESPN 7 event in Washington DC on Saturday ended five seconds sooner, Overeem would have claimed a victory on the judges’ scorecards as ESPN said at the time that he was leading four rounds to zero.

But, with four seconds to go, everything changed. His opponent, Jairzinho Rozenstruik, hit him with a punch so hard it dropped Overeem to the floor, burst a massive hole in his lip, and left him in need or medical attention.

The referee rewarded Rozenstruik with a knockout win.

Look at photographs of the images below, but they are not for the faint-hearted: 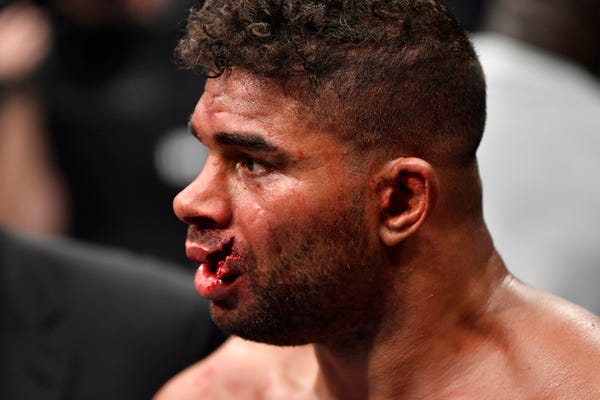 He lost by knockout. Photo by Jeff Bottari/Zuffa LLC via Getty Images

“Getting stitched up,” Overeem tweeted after the loss. “Lip not to sexy at the moment.”

He added that he could have continued, and thinks the referee was quick to stop the fight. “A little bit of a fast stoppage if you ask me — but hope you guys enjoyed the fight.”

Andy Ruiz Jr. says he lost his world titles to Anthony Joshua because he was undertrained, overweight, and partied for 3 months

A nervous Anthony Joshua exorcised his New York humiliation by outboxing Andy Ruiz Jr. to win his world titles back in style

Deontay Wilder says Anthony Joshua will keep avoiding him even if he beats Andy Ruiz Jr.

Saudi Arabia’s Andy Ruiz Jr. vs. Anthony Joshua fight is littered with athletes who have been busted for drug use

The $100 million Andy Ruiz vs. Anthony Joshua fight is ‘masking a darker truth’ in Saudi Arabia, and boxing is burying its head in the sand

Wladimir Klitschko says Anthony Joshua should never have lost to Andy Ruiz Jr. and expects him to dominate once again at heavyweight