By osingh@businessinsider.com Olivia Singh on December 6, 2019
This post was originally published on this site

Arrowverse star Katherine McNamara says that filming The CW‘s “Crisis on Infinite Earths” crossover event was “utter mayhem” and it’ll be an emotional rollercoaster for fans.

“We were constantly running around from show to show and it was utter mayhem, but in the most organized way,” McNamara, who stars as Mia Smoak on the eighth and final season of “Arrow,” said during an interview with Insider. Her character is the daughter of Oliver Queen (Stephen Amell) and Felicity Smoak (Emily Bett Rickards).

“Crisis” kicks off on Sunday and will span across a total of four nights through January as various DC comics superheroes team up to prevent the destruction of the multiverse. You can expect to see characters from “Arrow,” “The Flash,” “Supergirl,” “Legends of Tomorrow,” “Batwoman,” and “Black Lightning.” There will also be appearances from “Smallville” stars Tom Welling (Clark Kent) and Erica Durance (Lois Lane), among others.

McNamara told us that filming the five episodes took several weeks and plenty of planning.

“We were constantly running around from show to show and it was utter mayhem, but in the most organized way,” the 24-year-old actress said, explaining the challenges of getting a large cast together to film scenes.

“All of us did multiple scenes on this crossover where we would just get shuttled to a set with about 20 minutes to do our reaction shots and throw out a couple of lines for a big group scene,” she continued.

“It’s movie magic a little bit to make it all work. But it’s a huge credit to the whole Arrowverse team up there in Vancouver to really dig in and all the writers down here in LA really dig in and commit to making this work. And it’s really going to be something special.”

“It’s like when you get to go on a field trip at school and meet up with another class, you kind of get to all play together and see what happens and see where that magic is,” she said of working with her Arrowverse costars.

From left to right: Ruby Rose, Stephen Amell, and Katherine McNamara. The CW

McNamara went on to say that for her, the most challenging aspect was “just trying to keep track of it all,” since scenes are filmed out of order and the shooting schedule is hectic.

“It really takes all of us to keep track of, ‘OK where are we at? What’s happened? What has yet to happen? What’s about to happen? And what Earth are we on anymore?'” she said.

Stars like Amell and “The Flash’s” Grant Gustin have appeared on crossover events since the first one took place in 2014 (titled “Flash vs. Arrow”), but “Crisis” marks McNamara’s first appearance on the CW event.

The actress made her Arrowverse debut on season seven, episode eight of “Arrow” during flash-forward scenes that took place in 2040. On season eight, Mia and others from Future Team Arrow got transported to the present timeline and she was reunited with Oliver, who she never got to interact with as a child. Instead, she was told stories about his heroism and legacy.

Throughout season eight of “Arrow,” the layers of the father-daughter dynamics have been explored, resulting in heartbreaking moments and thrilling scenes that showed Oliver and Mia fighting alongside each other during missions. The most recent episode showed Mia and Oliver struggling to come to terms with the Green Arrow’s death, since he’s not expected to survive “Crisis.” 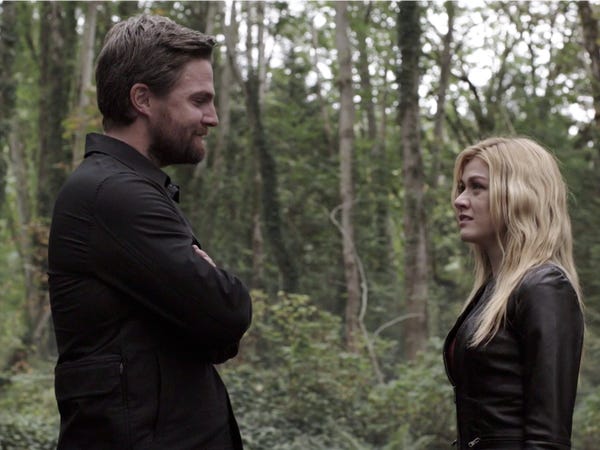 Stephen Amell and Katherine McNamara on “Arrow.” The CW

“I think Oliver has finally accepted his fate, or his potential fate, as it were, whereas Mia now understands why he made the choices he made when she was a baby and understands that he didn’t take them lightly and he did it quite painfully, but in order to serve the greater good,” the actress said.

“She now has a healthy respect for that, but she’s not going to let him go without a fight,” McNamara continued. “And that’s kind of what we see Mia dealing with during the ‘Crisis,’ is fighting against the impending destiny that may or may not be able to be stopped.”

McNamara also said that the crossover, which is the epitome of “legacy, sacrifice, and destiny,” features “a healthy dose” of action sequences and heartfelt moments for fans.

“I think they’re definitely gonna need tissues and ice cream and maybe an energy drink throughout this because it’s exhausting, both emotionally and physically for people,” she said.

She continued: “But it’s really great and it speaks to what the core of the Arrowverse is, that heart of these characters that are willing to fight physically and emotionally for the greater good and for what they believe is right and for the people that they love. You see that in every single character because the stakes are so high in this ‘Crisis.'”

When the final hour of “Crisis” airs on The CW on Tuesday, January 14 at 9 p.m., there will be two more episodes of “Arrow” before the show concludes. McNamara said that “the crossover changes everything” and sets the stage for a potential spin-off starring her character and the Canaries, played by Katie Cassidy Rodgers (Laurel Lance) and Juliana Harkavy (Dinah Drake).

“It changes the multiverse irreversibly and that is the catalyst for the backdoor pilot and for the conclusion of the series,” McNamara said.

“So really, episode seven that we just saw is the last episode of ‘Arrow’ to exist in its original form and from this point forward, all bets are off and the rules are forever changed. Don’t count on anything, expect the unexpected, and be ready for a crazy ride.”