By feedback@businessinsider.com Bill Bostock on December 3, 2019
This post was originally published on this site

North Korea warned the US in cryptic and ominous terms it can expect a “Christmas gift,” but the nature of it will depend on the US committing to real action.

North Korea says the US is putting off a response to North Korea’s decision to cease testing intercontinental ballistic missiles in 2017 because of the 2020 election.

“The DPRK has done its utmost with maximum perseverance not to backtrack from the important steps it has taken on its own initiative,” Ri Thae Song, vice foreign minister of US affairs, told the Korean Central News Agency (KCNA) in regard to ending tests.

“What is left to be done now is the US option and it is entirely up to the US what Christmas gift it will select to get.”

“The dialogue touted by the US is, in essence, nothing but a foolish trick hatched to keep the DPRK bound to dialogue and use it in favor of the political situation and election in the US.”

Talks between the US and North Korea have stalled since Kim Jong Un set a year-end deadline for the US to show more flexibility about missile tests in April.

The worry is that North Korea could resume nuclear and long-range missile testing, which would undermine State Department claims that “good discussions” were had between the two in November.

Those talks between low-level officials in Stockholm ended with North Korea expressing anger over the State Department’s portrayal of the result. 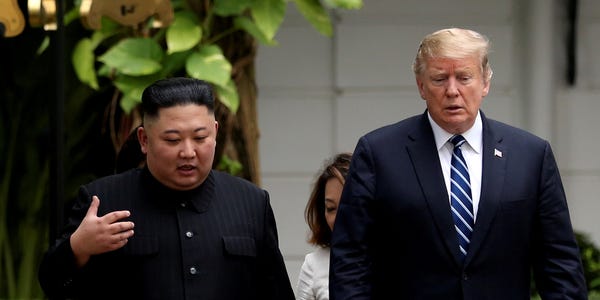 It also warned that if the US did not change its approach by the end of the year, then relations between the two countries “may immediately come to an end.”

In mid-November the US postponed a planned military exercise with South Korea, in what the US defense secretary Mark Esper called an “act of goodwill” toward North Korea.

North Korea did not see the act in the same light.

The US remains hopeful North Korea will make good on its promise in June 2018 to denuclearize.

Speaking at the NATO summit in London on Tuesday, Donald Trump said of Kim: “He definitely likes sending rockets up, doesn’t he. That’s why I call him rocket man.”

“If I weren’t president you’d be in a war right now.”